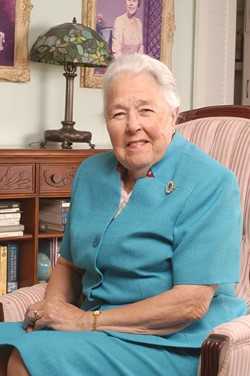 Marjorie Sirridge, M.D., was a champion for women in medicine and a fixture at the UMKC School of Medicine

Sirridge earned her medical degree in 1944, graduating first in her class from the University of Kansas School of Medicine. She dropped out of medicine for a time when told it was improper for women to become pregnant while doing their post-graduate residency.

She later returned to medicine and had worked for more than a decade in private practice and on faculty at the University of Kansas School of Medicine when she and her husband, William, received a new calling. They were recruited to serve as two of the three founding docents for the new University of Missouri-Kansas City School of Medicine when the School opened in 1971.

Sirridge spent the remainder of her career in numerous leadership roles at the school including a tenure as dean. While serving as a docent, Sirridge established the UMKC Program for Women in Medicine to help female students and physicians succeed in a male-dominated system. Due in part to her influence, the UMKC School of Medicine boasts one of the highest rates of female students among the country’s co-educational medical schools.

Longtime School of Medicine Dean Betty M. Drees, M.D., remarked following Sirridge’s death in 2014 at the age of 92, how Sirridge had enriched those around her.

“We have all been extremely privileged to have worked with Dr. Sirridge for many years and have been enriched by her tremendous wisdom and guidance,” Drees said. “Her contributions to the School of Medicine are many and are sure to have a lasting and positive impact on future generations of physicians.”

Sirridge was honored in 2010 by the Foundation for the History of Women in Medicine with the Alma Dea Morani, M.D., Renaissance Woman Award. In 2003, the National Institutes of Health’s National Library of Medicine (NLM) created a traveling exhibit called Changing the Face of Medicine: Celebrating American Women Physicians. Sirridge was one of the pioneering women included in the exhibit that now exists online to honor the achievements of women who excelled in their medical careers.

Marjorie and William Sirridge endowed the Sirridge Office of Medical Humanities and Marjorie Sirridge became its first director in 1992, building a program of courses in medicine and the humanities that other medical schools in the country have copied. She later endowed a professorship in medical humanities.

“There have been many ups and downs,” Sirridge said in her Changing the Face of Medicine biography. “But I have never felt that I made the wrong decision when I decided to be a physician.”