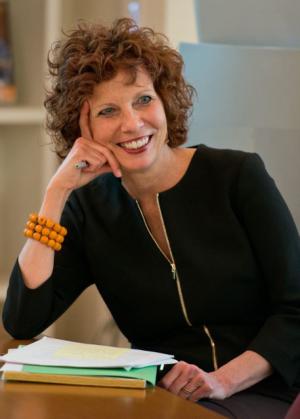 The many forms of media — from movies to photographs and even YouTube videos — serve as an opening for analysis and discussion of individual experiences with illness and disability, said Therese Jones, Ph.D., associate director of the Center for Bioethics and Humanities at the University of Colorado Anschutz Medical Campus.

Jones served as the keynote speaker for the UMKC School of Medicine’s 2021 Sirridge Lecture in an online format on March 30.

Jones, who also is the director of the Colorado school’s Arts and Humanities in Healthcare Program, said these images offer an evocative illustration of health care issues ranging from access to care to life and even racism.

“These works can foster empathic responses, sharpen critical thinking and develop communication skills, especially in our work with health profession students,” Jones said. “Visual materials can serve as openings for our students to critique the culture of health care itself.”

She shared that 56 percent of children between the ages of 8 and 12 and 69 percent of teens from 13 to 18 years old use YouTube for educational reasons, including science topics. She also noted how images shared from cell phone photos and videos often play a crucial role in rallying social and political responses to confront issues and act as a catalyst for reform.

Jones also spoke about how many humanities programs in health professions schools share a common method of developing observational skills, critical thinking and empathy through student interaction with the visual arts from paintings and photography to visiting art galleries and museums. The School of Medicine provides similar opportunities in its humanities curriculum.

Jones explained a new thinking in academic medicine that focuses on art as an opportunity to unveil what is hidden in the images and recognizing what is unique or strange in what otherwise seems ordinary.

“The arts-based curriculum is designed to be a process, rather than an event in which learners move from the neutral position of looking to an implicated position of the witnessing,” Jones said. “They realize that seeing is more than description. That scene is filtered through their personal values and our cultural norms. And these inhibit nuanced, even contradictory observations.”

The goal, she explained, is to take participants from a sense of self-awareness to self-criticism, and teaching observation as a pathway to a more humane approach to health care.

A native Kansan who received both her bachelor’s and master’s degrees in theater arts and English at Pittsburg State University in Kansas, Jones received a Ph.D. in English in Colorado before taking a postdoctoral fellowship in medical humanities in Ohio. She currently teaches health, humanities and disability studies at the University of Colorado schools of medicine and pharmacy, and in physical therapy and physician assistance programs among others.

The Sirridge Lecture is named for William T. Sirridge, M.D., and his wife, Marjorie S. Sirridge, M.D., two of the UMKC School of Medicine’s original docents who viewed the humanities as an essential part of students’ medical training. 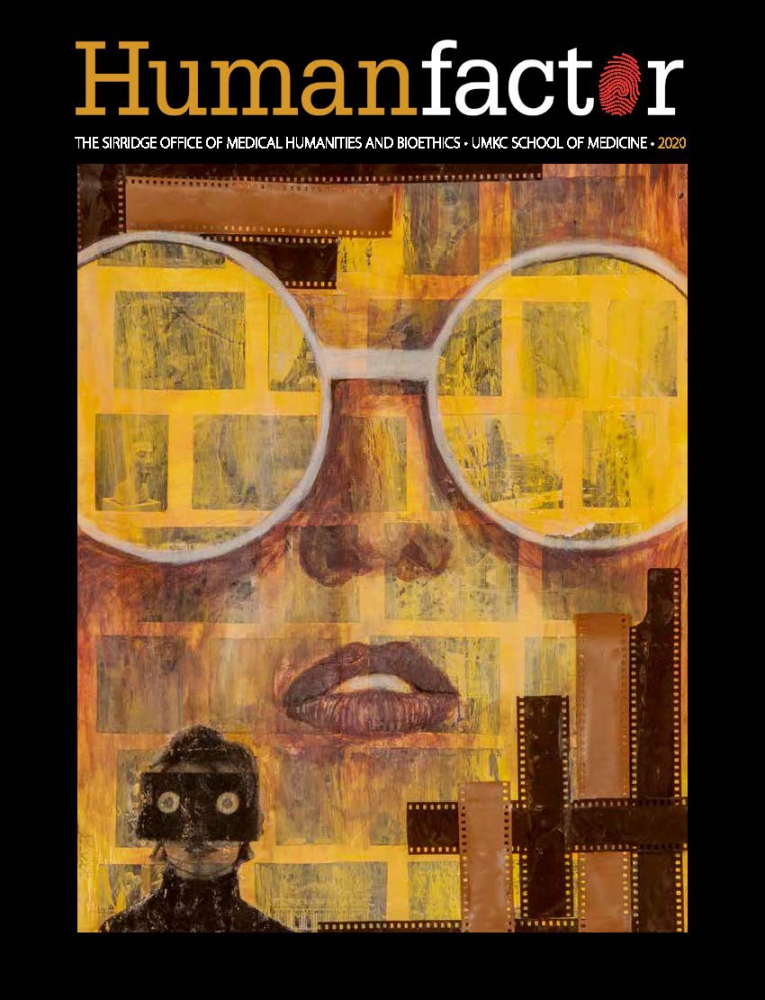 The 2020 issue the UMKC School of Medicine publication, Human Factor, is now available online. Human Factor celebrates the connection between art, humanities and the practice of medicine.

The publication showcases the creativity, imagination and talent of our students, alumni, residents, faculty and staff. All of the printed words and images featured in this publication make the important link between an appreciation of art and compassionate patient care — illustrating the significant role of medical humanities.

Watch for a call for submissions to the 2021 edition of the Human Factor early next next fall.

Students, residents and faculty from the UMKC and University of Kansas schools of medicine are invited to the final event in a series of salons on arts and medicine.

The event will take place from 4-6 p.m. on March 4 at Unity Temple on the Plaza. Led by Paul Rudy, DMA, the session, “Listen! Yes, Really Listen,” offers an experience of the impact sound and vibration has on our ability to really listen to each other.

The series of salons are a collaborative effort spearheaded by UMKC faculty members Stuart Munro, M.D., and Jennifer Martin, Ph.D., and Bradley Barth, M.D., at the KU medical school. It is funded by a grant from “Frontiers of Arts and Medicine.”

The overarching theme is “What If: The Healing of Art and Medical Humanities.” The events are open to art and medicine students, residents and faculty from both institutions to foster dialogue between disciplines.

The first salon was a new play at The Living Room Theatre called “DNR” that explored the implications of “Do Not Resuscitate.” The second featured an evening of films, hors d’oeuvres and a lively discussion of how medicine has impacted art in films. Others included “Sharing Your Stories,” led by poet laureate of Kansas Huscar Medina, and “Music in Medicine: How Music Adds Meaning to your Lives,” led by Dr. Stuart Munro and Dr. Jennifer Martin.

One of the best things parents can do for their young children to help them succeed in life is to talk to them. A lot.

Dana Suskind, M.D., has spent much of the past nine years advocating for early childhood development by focusing on the importance of language and the power of parent-talk and interaction to build children’s brains. The 1992 graduate of the UMKC School of Medicine discussed her career path at the 2019 William and Marjorie Sirridge Lecture on Thursday, Sept. 19, at the School of Medicine.

A professor of surgery and pediatrics at the University of Chicago and director of the Pediatric Cochlear Implantation, Suskind is founder and co-director of TMW (Thirty Million Words) Center for Early Learning + Public Health. The program offers evidence-based interventions to optimize brain development in children from birth to five years of age, particularly those born into poverty. It combines education, technology and behavioral strategies for parents and caregivers to enhance the verbal interactions with their children.

As a cochlear implant surgeon, Suskind realized vast differences in her patients after undergoing the implant. Some grew to talk and communicate well while others didn’t. The gap resulted not only in some children having a much smaller vocabulary, but also impacted their IQ and test scores in the third grade.

While cochlear implants brought sound to a child’s brain, Suskind found that something else was needed to make that sound have meaning.

“I came to realize that during their first three years, the power of language is the power to build a child’s brain,” she said.

Suskind pointed out that most of the organs in the human body are fully formed at birth. That’s not so with the brain, which doesn’t fully develop for many years after birth. She said the brain is particularly active and rapidly developing during the first three years, making it important for young children to grow up in a language-rich environment.

“At no other time in life will brain development be so robust and active,” Suskind said.

In 2014, she wrote Thirty Million Words: Building a Child’s Brain. The book describes her study of how children develop communication skills and how those who thrive live in households where they hear millions of spoken words. Her book reached the number one spot on Amazon’s best-seller’s list for parenting and family reference.

Following medical school, Suskind completed her residency at the University of Pennsylvania Hospital and a fellowship at Washington University Children’s Hospital.

The Sirridge Lecture is named for William T. Sirridge, M.D., and his wife, Marjorie S. Sirridge, M.D., two of the UMKC School of Medicine’s original docents. The Sirridges viewed the humanities as an essential part of students’ medical training. In 1992, they established the Sirridge Office of Medical Humanities and Bioethics to merge the humanities with the science of medicine. Today, the school recognizes their dedication, compassion and advancement of patient care and medical education in Kansas City with the William and Marjorie Sirridge Lecture. The Medical Humanities and Bioethics Advisory Board Committee was established as an interdisciplinary group to advise and coordinate various humanities activities. Members include both faculty and staff from the School of Medicine, the College of Arts and Sciences, other various UMKC departments, as well as community members. Meetings are held bi-monthly in the Humanities Conference Room, at UMKC’s School of Medicine. 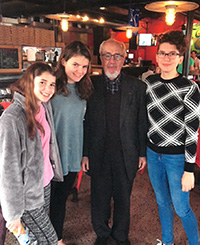 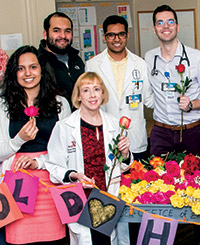 The Department of Medical Humanities and Bioethics is responsible for oversight and management of the following courses:

The Department of Medical Humanities and Bioethics is also responsible for oversight and support of:

The Department of Medical Humanities and Bioethics is also responsible for the oversight and support of a variety of student organizations and service learning activities including:

The Sirridge Office of Medical Humanities and Bioethics presents the annual Sirridge Medical  Humanities Lectureship. The next lecture will be held in March, 2022.