Interested medical students can contact Saundra Thompson regarding ophthalmology clerkships. On average, one medical student is accepted each month for a clerkship in which they will participate in educational activities with the residents, actively participate in clinic and observe ophthalmic surgery. An examination and presentation to residents and attending physicians is required at the conclusion of the clerkship.

At the VRC, we maintain a strong tradition of being the first in the development of new clinical therapies and new tools that aid clinicians in treating patients who suffer from eye conditions.  The Department has served as a host site for numerous sponsored clinical trials since its early days.  It was the first in the world to successfully perform excimer laser surgery with a commercial instrument.

Founded in 2007 with the establishment of the Felix and Carmen Sabates Missouri Endowed Chair in Vision Research, the VRC’s Basic and Translational Research Programs are at the cutting edge of vision research, attracting the brightest minds in the field to test new ideas and concepts using state-of-the-art equipment to develop cures for diseases that affect the retina, including age-related macular degeneration, diabetic retinopathy, and glaucoma.

The effects of these blinding diseases will continue to impact a significantly greater number of people. With an aging Baby Boomer population, and the prevalence of eye-related disorders due to age, diabetes, and other conditions, the work of the VRC is paramount.

Our research is vigorous. Not only do we test new ideas and concepts in our basic research, we also take knowledge and treatments already available and improve them through translational research. In this way, our research goes from bench to bedside in the form of therapies and techniques to improve patients’ lives.

Our current research efforts for age-related macular degeneration, diabetic retinopathy, and glaucoma will allow us to advance the research further in the hope of developing cures.

The UMKC School of Medicine made a strong showing with 10 students among the winners in the 10th annual UMKC Health Sciences Student Research Summit. For the second year in…

Technology used in eye exams called microperimetry could prove to be an effective, non-invasive method of identifying early symptoms of multiple sclerosis. An article recently published by researchers at the…

UMKC School of Medicine vision researcher Peter Koulen, Ph.D., has received a $1.16 million grant for a study to battle vision loss and blindness. Backed by the National Institutes of… 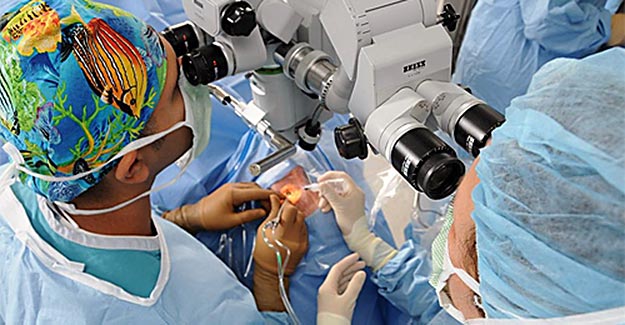 The aim of the UMKC Department of Ophthalmology is to ultimately to improve the lives of those afflicted with eye disease. We accomplish this vision through the following tenets:

Over forty years ago, the first class of resident physicians graduated from the Department of Ophthalmology at the UMKC School of Medicine. This marked a commitment to providing the very best care to patients with eye disease.  The same mission drives our efforts today, as we continue to train the next generation of ophthalmologists. Today, we continue to  guide the science that will eventually equip our doctors and provide our patients with the best possible treatments available.

The UMKC School of Medicine Department of Ophthalmology has seen exponential growth over the years not only in faculty, but research and patient care. The Department now has numerous faculty members involved in patient care, research and clinical trials. Founded in 2007, the Vision Research Center at UMKC—the research arm of the Department of Ophthalmology—provides a direct avenue for basic science research, translational research and clinical trials. This ensures that patients with ocular disease receive the most advanced medical treatments available. From lab bench to bedside, the VRC offers an unprecedented interdisciplinary synergy with a unified goal: to better diagnose, prevent, and treat eye disease and vision disorders as to make a difference in the lives of millions of people worldwide.

Thanks to our generous supporters, talented faculty, gifted researchers, and enthusiastic residents and fellows, the Department is poised to make a significant impact in better treatment for eye disease, leading to a better quality of life for generations to come.

Nelson Sabates, MD
Professor and Chairman of the
UMKC Department of Ophthalmology

The Department of Ophthalmology at the University of Missouri-Kansas City School of Medicine traces its origins back to 1961. Dr. Felix N. Sabates, a fellow at the Eye Research Foundation and Massachusetts Eye and Ear Infirmary, Harvard Medical School, was recruited as head of the Retina Service and Assistant Professor of Ophthalmology at the new Eye Department at the University of Missouri in Columbia.

During the same year, Kansas City General Hospital (the predecessor of Truman Medical Centers) was experiencing a financial crisis due to lack of funding from the city  and faced the loss of accreditation with their teaching program. Dr. Vernon Wilson, Dean of the School of Medicine at the University of Missouri-Columbia, along with the supporting members of the medical community in Kansas City, established an affiliation between the Kansas City General Hospital and the medical school in Columbia to maintain the educational programs. Dr. John Buesseler, the founder of the Eye Department at the University of Missouri-Columbia, was appointed as liaison officer to implement the affiliation. The Department of Ophthalmology at Columbia and the Eye Department at General Hospital were integrated with residents rotating from the Columbia to Kansas City for their training. During this time, Dr. Sabates traveled to Kansas City regularly, not only to supervise the residents, but to monitor the program activities. 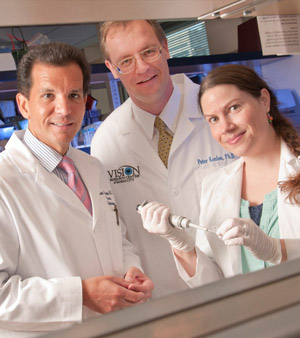 In November 1966, Dr. Sabates resigned as Associate Professor and Acting Chairman of the Department of Ophthalmology in Columbia and moved to Kansas City where he was given the responsibility of directing the eye program at the General Hospital on a part-time basis. The physical facilities at the hospital were antiquated with little equipment. Clinics were held in the basement of the hospital and though frequent discussions were held on facility updates plans were deferred due to financial circumstances.

The establishment of the University of Missouri-Kansas City School of Medicine in 1971 heralded a new era on Hospital Hill, and the eye program at the General Hospital became independent and received full accreditation in 1970. Dr. Sabates remained chief of the Division of Ophthalmology, part of the Department of Surgery; however, financial support for the Department continued to be limited due to other priorities within the new medical school and hospital.

It was a severe challenge to secure attending staff to teach in the training program and care for the clinic population under less than optimal conditions. But former residents of the program in Columbia with established practices in the Kansas City area provided great suppport.

In the middle 1970s, financing had become available and the Department of Ophthalmology was moved from the basement of General Hospital to the fourth floor of Truman Medical Center. Approximately 2,000 square feet of a new clinic space was established for the Department. 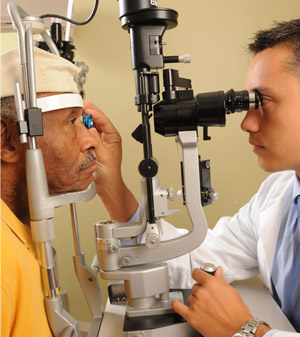 At this time, the ophthalmology program that had been a section of the Department of Surgery acquired departmental status, and Dr. Sabates was named as Chairman of the new Department of Ophthalmology.

In 1986, a group of ophthalmologists, members of the staff and friends of the community established a not-for-profit organization to support the Department of Ophthalmology. A new facility was constructed close to Truman Medical Center and the University of Missouri-Kansas City School of Medicine for the use by the Department.

In 2013, the Department relocated to a new clinic in the Hospital Hill Center building. And in 2015, it moved to its current location in the University Health Building, a state-of-the-art facility providing space and the latest technology to allow cutting-edge education, testing and treatment in eye care.