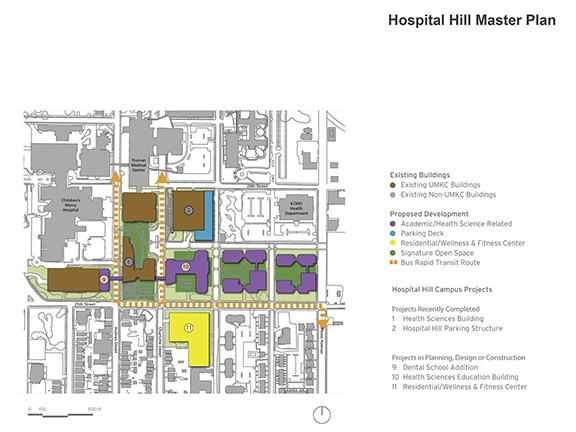 Campus housing for Hospital Hill students, including the Schools of Medicine, Dentistry, Nursing and Pharmacy, took a step closer to becoming a reality on Jan. 31 when the University of Missouri Board of Curators gave thumbs up to the plan during a meeting in Kansas City.

The project plans include a 254-bed apartment-style development designed similar to the Oak Place Apartments that were completed in 2008 on Oak Street just west of the UMKC Volker Campus. Included is a 196-space parking garage dedicated for residents.

A conceptual drawing of proposed Hospital Hill development shows the $29.3 million residential project located at the southeast corner of 25th and Charlotte streets.

“This is a exciting development for our students on the Hospital Hill campus,” said School of Medicine Dean Betty Drees, M.D. “We are pleased that the board of curators has given its support to a project that will bring a new vitality and enhance the student experience on Hospital Hill.”

During the meeting in Kansas City, the board of curators voted to allow the University to issue bonds and seek requests for developers’ proposals. Those proposals are expected back in early March. The plan calls for the board to review the proposals in April and construction of the development to be completed by July 2014.

University leaders say the new student housing would add an important element to efforts to increase enrollment in the health professions school and enhance other area life-science activity. The project would also help spur redevelopment of the surrounding neighborhoods, possibly attracting new restaurants and stores.