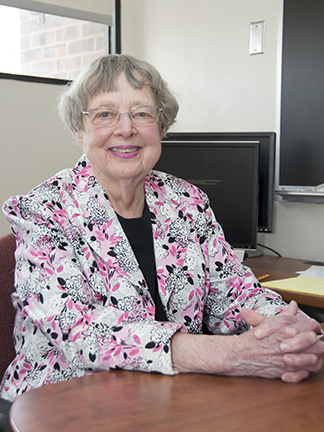 One of the School of Medicine’s earliest and long-time faculty members, Louise Arnold, Ph.D., who served as associate dean for medical education and research until her retirement in 2012, died on Dec. 17.

Arnold joined the School of Medicine faculty in 1971 after hearing about the new School of Medicine serendipitously when she, her son Conrad, and her husband, Wilf, came to Kansas City as Wilf was joining the staff at the University of Kansas. Hired as education researcher and ultimately as the associate dean, Arnold spent more than 40 years helping refine the school’s curriculum and touting its key elements to medical educators nationwide.

She received her doctorate in sociology at Cornell University. Arnold and Richardson K. Noback, the UMKC School of Medicine’s founding dean, regularly discussed the many values, beliefs and enthusiasm they shared for their alma mater. As a postdoctoral fellow at Cornell’s Sloan Institute of Hospital Administration, Arnold studied the qualities that were most important for hospitals to provide compassionate care of patients. Thus began her storied career in promoting the role of professionalism and the importance of the development of professional identity for UMKC School of Medicine students.

A respected national and international scholar, Arnold was the founding chair of the Association of American Medical Colleges National Group on Combined Baccalaureate-M.D. Programs. She continued throughout her career to be an active participant at AAMC meetings.

She helped the City University of New York develop a seven-year combined degree medical school. The University of New Mexico established a combined baccalaureate-M.D. program with her help. Arnold encouraged faculty at the University of Washington to use learning communities patterned after UMKC’s docent system to deliver part of their clinical curriculum.

By 2011-2012, more than 60 medi­cal schools had incorporated some form of learning communities similar to those at UMKC. Many are members of the national Learning Communities Institute that Arnold and other leaders infor­mally organized.

In 2012, Arnold received the Ron Arky Award, named for the professor of medicine at Harvard Medical School who founded the Learning Communities Institute, for significant contributions to the development in learning communities in medical education.

“Dean Emerita Betty Drees remembers Dr. Arnold as a role model and as a strong woman faculty member and I would agree,” said School of Medicine Dean Mary Anne Jackson, MD. , ’78. “Through the months of the pandemic as Dr. Arnold worked from home, she continued to actively work on projects and curriculum, mentoring junior faculty and connecting with others as she has always done. Having known Dr. Arnold as a student who started here in 1972, I greatly valued the opportunity to work with and learn from her during the last several years. She was truly one of the warmest, most gracious and smartest colleagues and she will be dearly missed.”

School of Medicine leaders will be planning a special event in the coming weeks to celebrate Arnold’s life and contributions to the school.