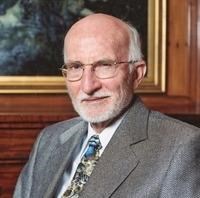 After graduation from medical school and residency in general surgery at the University of Kansas School of Medicine, Dr. McNabney joined the Kansas City General Hospital staff, and served as an associate professor in surgery until he was drafted into the Army in 1968. As a board-certified surgeon, he was assigned as Chief of Surgery for the 45th Surgical Hospital in Tay Ninh, serving until 1970. He returned to General Hospital after his military service and was hired by Dr. Edward J. Twin, General Hospital’s new Executive Director, as Director of Trauma Services. With a goal to improve the quality of emergency medicine care in the Kansas City community, he founded the residency training program in 1973, one of the first in Emergency Medicine, in the US. The residency program has since graduated 47 classes totaling 386 Emergency Medicine physicians, with many of those physicians serving in leadership roles at the School of Medicine and across the country. Dr. Bill Robinson, Dr. Mark Steele, Dr. Richard Schwab, Dr. John Ma, Dr. Matthew Gratton and Dr. Adam Algren, followed as Department Chair, and all have maintained the tradition and excellence established by their mentor.

Dr. McNabney served as the Chair of Emergency Health Services from 1972-1986. He was a Professor with the University of Missouri-Kansas City SOM since 1978 and served as Assistant Dean for Graduate Medical Education for the SOM from 1987-1999. Nationally he served as President of the University Association of Emergency Medical Services from 1980-1981, as a member of the Residency Review Committee for Emergency Medicine from 1981-1984, and as a director on the American Board of Emergency Medicine from 1982-1986. He was most recently serving as a member of the TMC Joint Conference and Quality committee, and his presence and insightful comments consistently fueled important conversation and action.