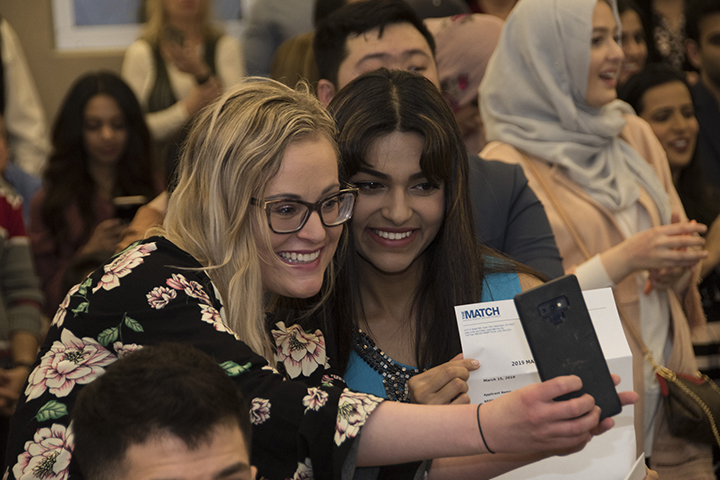 The brisk morning wind couldn’t cool the excitement and enthusiasm of Match Day 2019 at the UMKC School of Medicine. Residencies were announced for 93 students who are headed toward graduation in May. Family and friends cheered them on as they learned where they will write the next chapter in their medical careers.

Just more than half of the class will be headed to a primary care residency. Interim dean Mary Anne Jackson, M.D., said this year’s class exceeded the national average of students matching to primary care positions. Many, she added, are headed to notable programs throughout the country.

The students won assignments in 28 states and the District of Columbia, from Vermont to Hawaii and California to Florida. Some are headed to the top names in medicine, including Mayo, Stanford, Emory, Baylor, Yale and UCLA. A baker’s dozen will stay at UMKC and its affiliate hospitals; 22 will be elsewhere in Missouri and Kansas.

Internal medicine was the top category with two-dozen placements, followed by 14 in pediatrics or medicine-pediatrics, eight in psychiatry, seven each in family medicine and anesthesiology, and six each in emergency medicine and general surgery.

Just minutes before 11 a.m., Ryan Lee stood at the back of Theater A surrounded by friends. He was trying to remain calm as everyone waited for the appointed time when students could receive their Match envelopes and discover their residency destinations.

“Right now, I’m just feeling relieved because I know I have a job somewhere,” Lee said.

Moments later, he learned that he would remain in Kansas City for a preliminary medicine year at the School of Medicine before heading to St. Louis and Barnes-Jewish Hospital for a three-year anesthesiology residency.

Meanwhile, Amaka Ofodu was still gasping for breath and accepting a long line of hugs after receiving her first choice of residencies — medicine-pediatrics at Greenville Health System, University of South Carolina, Greenville.

“I can’t believe it. I’m still freaking out,” Ofodu said. “It’s a blessing. My family is here and my friends are all here. There’s just so much love and some much appreciation.”

Chris Favier held a letter in his hands as his father recorded the moment with a cell phone. His brother, Ben, a 2012 graduate of the UMKC School of Medicine, stood nearby watching with friends and family.

“And the survey says,” Favier said as he opened the letter. “Oh my gosh, Mizzou!”

A St. Louis native, Favier will be heading closer to home for his first residency choice of emergency medicine at the University of Missouri-Columbia.

“At first you’re really nervous and anxious but as time progresses, you look around at your family and friends and the excitement keeps building,” he said. “This was one of the residencies I was expecting so I’m very happy to go. And, I’ve got a job for next year, so I’m pumped.”