The PGY-1 year of the UMKC Neurology Residency Program will be an in-depth Internal Medicine experience provided in conjunction with the UMKC Internal Medicine Residency Program. The clinical sites of the UMKC Internal Medicine Program are Saint Luke’s Hospital and University Health Truman Medical Center, which will allow the intern to become familiar with each site prior to starting the intensive neurology years PGY-2-4. Each intern will spend one month on the stroke service at Saint Luke’s and 1-2 months on the consult service at TMC. This will allow for an initial exposure to clinical neurology during the PGY-1 year. The PGY-1 year will be capped off by a Neurology Immersion Block, which will involve intensive introduction to the basics of clinical neurology.

The PGY-2 year lays the foundation for the resident’s neurological education by exposing the resident to a wide variety of clinical neurology. The resident will play an integral role on stroke and other inpatient neurology services, including the intensive care unit. Each resident will have month long rotations on neuroradiology and neurophysiology. These rotations will serve as the basis for further learning in these foundational areas. Residents will have one month of elective time during the PGY-2 year.

Each resident’s one half-day per week continuity clinic at University Health Truman Medical Center will begin in the PGY-2 year. This clinic will allow the resident to take ownership of a group of patients in order to develop the skills necessary to practice independently in a post-residency career. 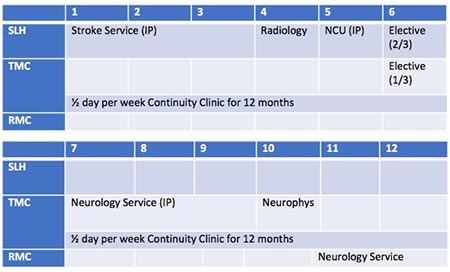 The PGY-3 year will advance the concepts learned in the PGY-2 year with a gradual transition towards more responsibility and leadership. The resident will spend time in several important subspecialties including epilepsy and movement disorders. Three consecutive months in the PGY-3 year will be spent at Children’s Mercy Hospital learning the essentials of child neurology.  Residents will have one month of elective time during the PGY-3 year.

The PGY-4 year is the culmination of the program. Residents will assume a leadership role on each service through which they rotate. They will also play an important part in the education of students and junior residents. The intersection between mental health and neurological disease will be explored during each resident’s one month rotation in the University Health Truman Medical Center psychiatry department. Residents will have two and a half months of elective time during the PGY-4 year.

Educational development will be fostered through a detailed didactic program. One half-day each week will be dedicated solely to resident education. Through interactive experiences and lectures, each half-day will explore neurological topics from different perspectives: neuroanatomy and localization, clinical neurology, basic science, and board review. Regularly scheduled Journal Clubs and Grand Rounds will complement the educational program.