Wible is a former United States Peace Corps Volunteer and is a member of the Alpha Omega Alpha Honor Society. He is the author of numerous peer-reviewed publications and textbook chapters and recently published a second edition of a textbook on interventional procedures in radiology. His clinical interests include oncologic and vascular imaging and treatment and clinical research at Saint Luke’s Plaza and Lee’s Summit Hospitals.

Kanter expressed his thanks and appreciation to Jeffrey Kunin, M.D., for his leadership as interim chair of the UMKC School of Medicine from 2016 to 2018.

TMC’s screening program emphasizes early detection and treatment for longtime smokers and ex-smokers. The event Thursday celebrated its patients’ and doctors’ success in committing to healthy living and saving lives. The screening program uses low-dose CT scans and is the only one in the nation to be driven by resident physicians, who are supervised by faculty from the UMKC School of Medicine.

Among the speakers at the event was Dr. Justin Stowell, the radiology resident who started the screening program and who has compiled statistics on its early success. When lung cancer is detected in its early stage, he said, cure rates of 70 to 80 percent are possible.

And besides catching lung cancer early, Stowell said TMC’s  program has had success in getting more than one-fifth of the people tested to quit smoking.

Lung cancer is responsible for 155,000 U.S. deaths a year, more than breast, prostate and colon cancer combined, which emphasizes the need for awareness events such as “Smokin’ Out Lung Cancer.” Stowell also noted that Medicare covers the early screening for many longtime smokers, and insurance companies have been adding coverage as the success of the screenings has been demonstrated.

The event, which included a barbecue lunch, was attended by some lung cancer survivors who had benefited from the screenings and subsequent treatment or surgery to remove their cancer. A video was shown that told the survival story of Thaddus Owens, who was at the luncheon.

The event also drew some smokers whose doctors had encouraged them to attend. One of them was 64-year-old Carl Kendall, who said he had tapered off in recent years but still smoked at least half a pack a day.

“I started smoking in 1968,” he said. “I have a doctor’s appointment next week, and I’m going to ask about this screening.”

Charlie Shields, TMC president and CEO, kicked off the presentations. Besides highlighting the screening program’s success, he noted that “Smokin’ Out Lung Cancer” was the first event sponsored by the UMKC Health Sciences District—a newly formed, premier academic health district made up of collaborating health care institutions on Hospital Hill.

“Truman Medical Centers is proud to be part of this exciting partnership,” Shields said. “The UMKC Health Sciences District is proving to do what it was intended, and that is to improve the health of the community in a variety of ways.”

The UMKC Health Sciences District kicked off November’s Lung Cancer Awareness Month by hosting “Smokin’ Out Lung Cancer.” Truman Medical Centers took the lead in the BBQ luncheon event, which raised awareness about lung cancer and lung cancer screening for trainees, faculty, staff, students and patients from across Hospital Hill. It also doubled as a celebration of the initial successes of TMC’s lung cancer screening program — the only resident-driven program in the country. For photos of the event, check our events page.

In the first 18 months after forming the multidisciplinary lung screening program, residents and fellows from UMKC successfully screened over 470 patients — a number that continues to grow. The cancer detection rate based on preliminary data is 27 cancers/1000 scans, which is more than five times the detection rate reported nationally in the ACR National Radiology Data Registry. Moreover, the majority of the lung cancers identified through the TMC program have been found at early, treatable stages, which is the ultimate goal of the screening CT.

The Radiology Department also saw more than half of the screened patients enter the path to living smoke-free. More than 22 percent of these patients QUIT SMOKING and the remainder decreased their habit — all within 18 months of screening.

For more information on the event and lung cancer awareness month, click here and check out the following interview with KSHB.com 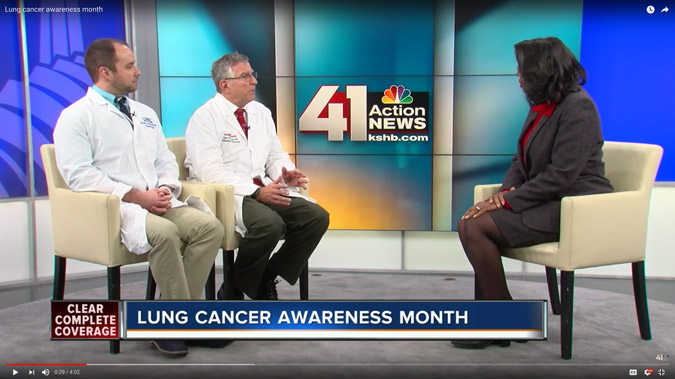 Two students received awards for their research posters at the Missouri chapter of the American College of Physicians annual meetings at Osage Beach. The meetings took place Sept. 15-18.

“I was interested in the field of neuroscience and ophthalmology,” Anand said. “I wanted to start conducting basic science research in order to further explore my interest in these areas before attempting to conduct clinical research.”

With his first place award, Anand is now eligible to take part in the poster competition at the national ACP meeting next March in San Diego.

“Working alongside two outstanding mentors, Dr. Koulen and Dr. Montgomery, I have gained an immense amount of experience and have learned everything from performing basic science techniques to using complex imaging and data analysis programs,” Anand said. “I have also become familiar with the process of compiling data, graphs, and other information in order to create a presentable research poster. All in all, the experience I have gained will be very beneficial for the research projects I conduct in the future.”

Cunningham placed third with her poster, Neuroradiologic characteristics of astrobastoma and systemic review of the literature: 2 new cases and 125 cases reported in 59 publications.

At the meeting, five students and 13 residents from the School of Medicine presented posters. The Missouri ACP competition drew 20 student posters and 80 posters from residents of medical schools throughout the state.