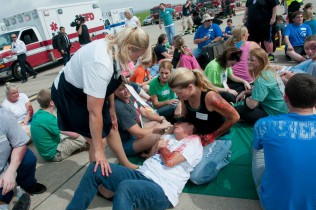 Several School of Medicine emergency medicine residents and faculty positioned themselves among the debris and injured people spread across the tarmac of KCI during a simulated airplane crash on June 18.

Emergency responders from the Kansas City fire and police departments, emergency medical services and ambulance crews were embroiled in the full-scale emergency exercise set up to have the look and feel of a real airport emergency.

“It would have been unrealistic to have four or five doctors on the scene in an emergency like that,” Hindsley said. “Our role was to observe and evaluate the performance as they were doing the drills.”

The Federal Aviation Administration requires that KCI conduct a full-scale emergency drill at least once every three years. Some of the volunteers who portrayed the 150 injured passengers were UMKC School of Medicine students.

Hindsley said only a few ambulance and EMS crews were able to take part in the drill. As a result, the large number of mock injuries made the scene difficult for the crews to triage and transport the many victims. That’s where Hindsley said he and the residents were able to help identify ways the crews could operate more effectively and efficiently.

“I think we made some positive suggestions and hopefully we’ll see some of them implemented,” Hindsley said.

The residents also came away with a better sense of what  emergency responders face  when an actual emergency takes place.

“We’re almost never on the scene of an emergency,” Hindsley said. “We get the patient when they’re in the hospital, so we don’t see a lot of field experience. We got a lot more exposure to what they do as far as triage and transporting patients, so I think it was a positive experience.”