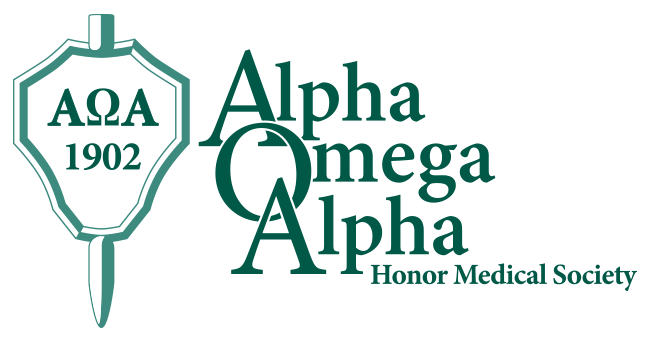 Election to Alpha Omega Alpha is an honor signifying a lasting commitment to scholarship, leadership, professionalism, and service. A lifelong honor, membership in the society confers recognition for a physician’s dedication to the profession and art of healing.

Criteria for election to Alpha Omega Alpha are detailed in the Constitution. About 3,500 students, alumni, house staff, and faculty are elected each year. Since its founding in 1902, more than 150,000 members have been elected to the society.

Alpha Omega Alpha — dedicated to the belief that in the profession of medicine we will improve care for all by:

You will often see the AOA publication, The Pharos, in the medical school or in your mailboxes. It is described at the AOA website as a quarterly journal which publishes scholarly essays covering a wide array of nontechnical medical subjects, including medical history, ethics, and medical-related literature. It is named for one of the seven wonders of the ancient world, the Pharos lighthouse of Alexandria.

Student officers of AOA present at various class meetings during each year at UMKC, describing how students are selected as well as discussing the value of becoming a member.

A few of our students recently have won research awards from AOA, and several students have published poetry in Pharos.

Membership in AOA has been described by AOA as follows: Alpha Omega Alpha is to medicine what Phi Beta Kappa is to letters and the humanities and Sigma Xi is to science. There are currently (as of 2016) 128 chapters in United States medical schools.