UMKC School of Medicine recognized students at the school’s two campuses in a rite of passage that marks the next step along their journey to becoming physicians.

An inaugural class of 16 students from the school’s new Mosaic Life Care in St. Joseph, Missouri, campus participated in that campus’ first White Coat Ceremony on Aug. 8. The event, sponsored by the Arnold P. Gold Foundation, emphasizes the importance of compassionate care for patients and proficiency in both the art and the science of medicine.

In Kansas City, the School of Medicine welcomed 125 new third-year students during the annual White Coat Ceremony one day earlier at the UMKC White Recital Hall.

The White Coat Ceremony has been a tradition at the School of Medicine since 2003. For UMKC medical students, it marks a transition in training from an emphasis on classwork to the final four years of more intensive clinical training.

UMKC opened its medical school campus at Mosaic in January with a focus on rural primary care medicine. Davin Turner, M.D., chief medical officer for Mosaic and associate dean for the St. Joseph campus, addressed the students, faculty and guests and spoke about the need for physicians in rural areas. 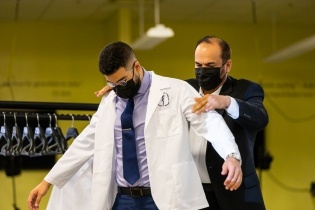 School of Medicine Dean Mary Anne Jackson, M.D., and Steven Waldman, St. Joseph campus dean, also spoke about becoming a physician and the significance of the physician’s white coat, symbolizing professionalism, caring and the trust between physicians and their patients.

On the Kansas City campus, third-year medical student Audrey Otwell also honored William Ritter, M.D., a staff cardiologist at AdventHealth Shawnee Mission, with this year’s Outstanding Years 1 and 2 Docent Award. Each third-year class nominates a Year 1-2 docent for the award based on their pursuit of teaching excellence in medicine.

Students at both campus ceremonies were read a compilation of their class reflections on the Philosophy of Medicine and were each individually recognized and presented their white coats by their docents.