The School of Medicine recognized 36 faculty members who recently received promotions and tenure and presented six special awards for faculty and student achievements during a reception on Sept. 28 at Diastole. 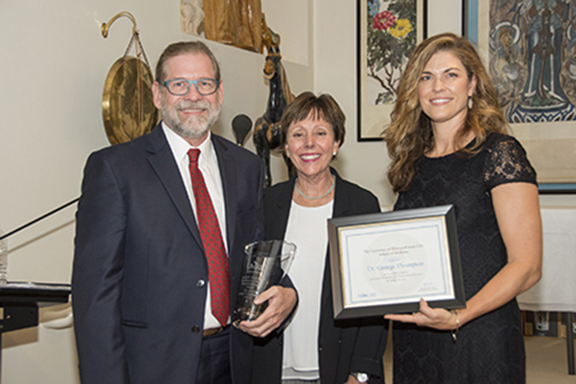 George Thompson, M.D., associate professor of psychiatry, received the third-annual award that recognizes someone who has contributed to innovation and scholarship in medical education.

Thompson says his goal in medical education is to support students in fully integrating humanism, good communication, and professionalism into their practice of competent biological medicine. He has served as course director for the School of Medicine’s courses on fundamentals of medical practice and CUES to medical communication. A nomination letter recognized him for nurturing medical professionalism in his students.

The fifth-annual awards were presented to faculty members for their excellence in mentoring, guiding, coaching and sponsoring students, trainees, staff and peer faculty. 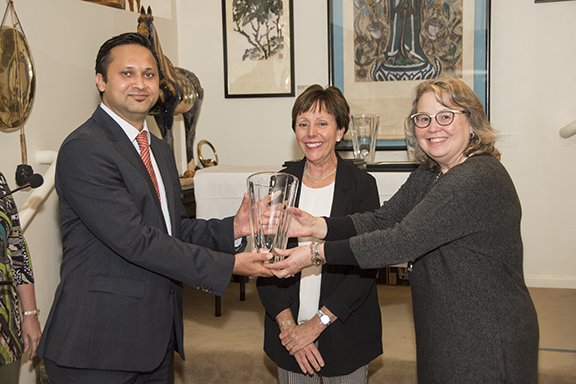 Prakash Chandra, M.D., assistant professor of psychiatry, received the award presented each year to an assistant or associate professor. Chandra joined the School of Medicine faculty in 2013. In letters supporting his nomination, Chandra’s trainees wrote, “I cannot remember a single time where Dr. Chandra was not there for us. No matter how busy he is, he always put his mentees ahead. He is a great listener and eager to teach. In addition to being a guide, Dr. Chandra has pushed me to achieve more than I could imagine.” 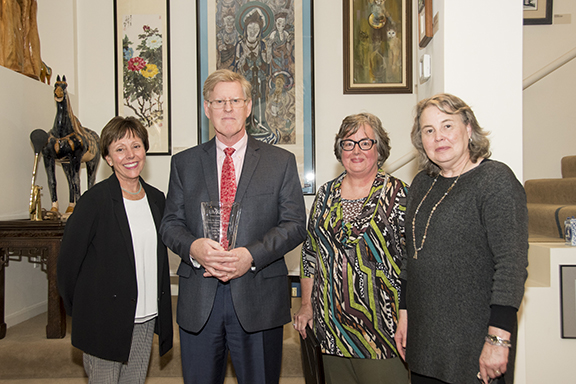 Paul Cuddy, Pharm.D., vice dean of the School of Medicine, received the Lifetime Achieve in Mentoring Award that is given to a full professor. Letters of nomination noted Cuddy’s 37 years of service to the School of Medicine where he has also served as senior associate dean for academic affair and associate dean for the curriculum among many other roles. One wrote, “Paul is a careful listener, gives constructive feedback and criticism in a manner that leaves a feeling that something was accomplished. He is the soul of the SOM.” Christopher Papasian Excellence in Teaching Award
Theodore Cole, Ph.D, professor of biomedical sciences, received the second-annual award recognizing a faculty member who excels in medical student education through innovative contributors to the educational mission. Cole has served a member of the School of Medicine’s biomedical sciences faculty since 1999. His students commended his encouragement and support in their nomination letters for the award. “Never a more respectful or gracious man, and with such a calming, ‘it’s not so complicated’ voice, he teaches.”

Excellence in Diversity and Health Equity in Medicine Awards
These awards recognize an individual or organization that has demonstrated sustained and impactful contribution to diversity, inclusion and cultural competency or health equity. The award is given to a student or student organization, and to faculty, staff, resident and/or organization/department. Carter has also served as a School of Medicine student representative to the diversity council as well as a student representative to the Children’s Mercy Diversity General Medical Education Sub-Committee. She works with School of Medicine partners on cultural competency curriculum reform to improve the student training in areas such as social determinants of health, personal biases and treating individuals from different backgrounds.

In the past year, the school’s SNMA chapter currently partnered with the Linwood YMCA to provide members who assist with its events, including the Launchpad after-school program, tutoring and mentoring middle and high school students. The chapter has also initiated new programming including a cultural competency workshop and a campus Living Culture event to celebrate diversity. For the past nine years, the organization has conducted a Black History Month Celebration that allows students to display their talents, while educating the audience about health issues that predominately affect the African American and Hispanic population.