A leading UMKC and Saint Luke’s Health System researcher, John Spertus, M.D., M.P.H., was heavily involved in important heart-procedure research that was published earlier this month and presented at the annual conference of the American Heart Association.

You can read an interview with Spertus about the research here.

A Washington Post story said the study, called ISCHEMIA, found that invasive procedures to unclog blocked arteries — in most cases, the insertion of a stent, a tiny mesh tube that props 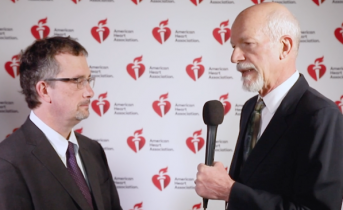 open a blood vessel after artery-clearing angioplasty — were no better at preventing heart attacks and death in patients with stable heart disease than were pills and improvements in diet and exercise. Overall, the study results suggest that invasive procedures, stents and bypass surgery, should be used more sparingly in patients with stable heart disease and the decision to use them should be less rushed, experts said.

Spertus is a UMKC professor of medicine and Daniel J. Lauer Endowed Chair in Metabolism and Vascular Disease Research. At Saint Luke’s Mid America Heart Institute, as clinical director of outcomes research, he developed technology that guides physicians and patients in medical-decision making by using models to measure and predict the risk factors of various procedures. Many experts cite two tools he created — the Seattle Angina Questionnaire and the Kansas City Cardiomyopathy Questionnaire — as the gold standards for measuring symptoms, function and quality of life in treating coronary artery disease and heart failure. Both have been translated into more than 95 languages.