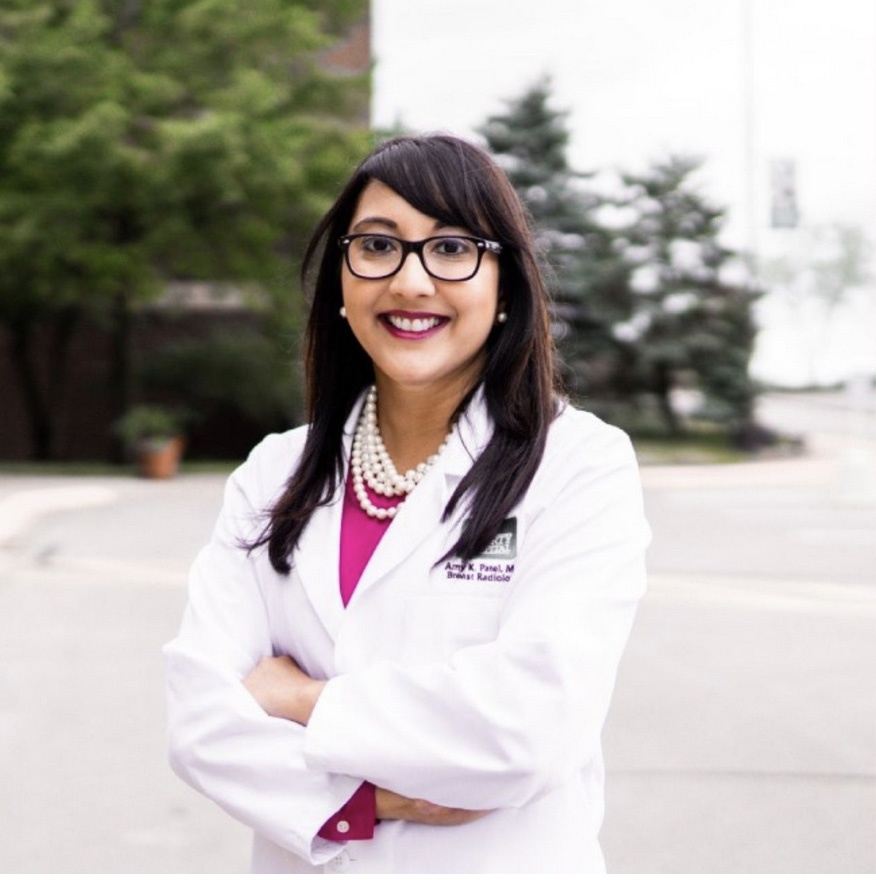 Since 1971, nearly 4,000 physicians and health care professionals across the United States have received their degrees from the UMKC School of Medicine. As a leadup to our Gold Jubilee 50th anniversary event on June 4, we are spotlighting some of our alumni who embody the school’s spirit and excellence in medical education and patient care.

After a brief stint in Boston Massachusetts at Beth Israel Deaconess Medical Center/Harvard Medical School, I returned to Kansas City. I work at Liberty Hospital, where I am a breast imaging specialist and medical director of the Breast Care Center. I also serve as assistant professor of radiology and adjunct faculty at the UMKC School of Medicine.

What is your focus in medicine?

My primary focus is on breast radiology with research interests in breast health equity, artificial intelligence, and digital breast tomosynthesis.

What is one of your fondest memories at the School of Medicine?

One of my most fond memories is having afternoon tea with Dr. Marjorie Sirridge in her office. She was one of my most beloved mentors as a medical student. She taught me to believe in myself, never give up, and push myself, because advancing myself meant I could also acquire the skills to help other women advance and become leaders, which would in turn advance our field.

What is the greatest lesson you learned during your time at the School of Medicine?

By far the greatest lesson was how to master time management and juggle many things early in one’s career.

What is something about you that people may not know?

If I hadn’t gone to medical school, I would have majored in vocal music at the UMKC Conservatory with an emphasis in opera!

Dana Suskind, M.D., a 1992 graduate of the School of Medicine and nationally recognized leader in early language development, will present to 2019 William and Marjorie Sirridge Annual Lecture on Sept. 19.

A professor of surgery and pediatrics at the University of Chicago, Susknid is the director of the Pediatric Cochlear Implantation Program and founder and co-director of TMW (Thirty Million Words) Center for Early Learning + Public Health.

As a surgeon performing cochlear implants in children, Suskind realized her patients’ language skills developed at far different rates. Through her research, she discovered that children who thrive hear millions of words during their early years and wrote a book on her work, Thirty Million Words: Building a Child’s Brain.

Through her Thirty Million Word Initiative, she developed an evidence-based intervention program that is intended to reduce the language gap between children in lower-income families and wealthier households. The program combines education, technology and behavioral strategies for parents and caregivers to enhance the verbal interactions with their children.

Following medical school at UMKC, Suskind completed her residency at the University of Pennsylvania Hospital and a fellowship at Washington University Children’s Hospital.

William T. Sirridge, M.D., and his wife, Marjorie S. Sirridge, M.D., two of the UMKC School of Medicine’s original docents, viewed the humanities as an essential part of a students’ medical training. In 1992, they established the Sirridge Office of Medical Humanities and Bioethics to merge the humanities with the science of medicine. Today, the school recognizes their dedication, compassion and advancement of patient care and medical education in Kansas City with the William and Marjorie Sirridge Lecture.