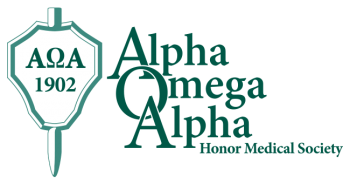 The School of Medicine’s Missouri Delta Chapter of the Alpha Omega Alpha Honor Medical Society welcomed its 2017 class of inductees during an annual celebration at Diastole.

Induction to the society is an honor that recognizes one’s excellence in academic scholarship and adherence to the highest ideals of professionalism in medicine. New AOA members are selected based on their character and values such as honesty, honorable conduct, morality, virtue, unselfishness, ethical ideals, dedication to serving others and leadership.

Sajid Khan, M.D., ’05, was the alumni inductee and Dev Maulik, M.D., chairman of obstetrics and gynecology and senior associate dean for women’s health, was this year’s faculty inductee.

Richard Isaacson, M.D., ’01, delivered the annual AOA Lecture on May 5. Isaacson serves as director of the Alzheimer’s Prevention Clinic and Weill Cornell Memory Disorders Program at Weill Cornell Medical College/New York-Presbyterian Hospital. He spoke on advances in the management of Alzheimer’s treatment and prevention.