The immediate past-president of the American Medical Association, Patrice Harris, M.D., said leadership is vital to properly address the persistent gaps and inequities in health care that have been highlighted during the COVID-19 pandemic.

Harris delivered the UMKC School of Medicine’s Dr. Reaner and Mr. Henry Shannon Lecture in Minority Health on Feb. 12 in a virtual event. She served as president of the AMA in 2020 during the onslaught of the pandemic.

“I think we can all agree that we have a lot on our to-do list, going forward, post COVID, and it’s going to require leadership,” said Harris, the first African American woman to serve as AMA president.

Harris said that as the coronavirus evolved, one of the AMA’s primary roles under her guidance was to ensure that the organization provided the most up-to-date, evidence-based resources and information in the midst of a public health crisis.

Harris shared what she said was a 25-year journey to becoming the 174th president of the AMA. She recalled that it wasn’t until after she had completed her undergraduate years of college at West Virginia that she met her first African American female physician.

After earning her medical degree in 1992 and becoming a psychiatrist, Harris served in leadership roles with several psychiatric organizations including the American Psychiatric Association.

Today, Harris is a psychiatrist and recognized expert in children’s mental health and childhood trauma. She serves as an adjunct assistant professor in psychiatry and behavioral sciences at Morehouse School of Medicine and the Emory Department of Psychiatry and Behavioral Sciences. In private practice, she consults public and private organizations on health service delivery and emerging trends in practice and health policy.

Along her journey to leading the AMA, Harris learned some lifelong lessons such as the importance of working together. The advocacy victories achieved in Washington, D.C., and at state levels don’t typically come through working in silos and without partnerships, Harris said.

Another vital learning moment in leadership came in realizing the need to embrace differing opinions.

That, Harris added, includes having what can be tough discussions about issues including social and institutional inequities. 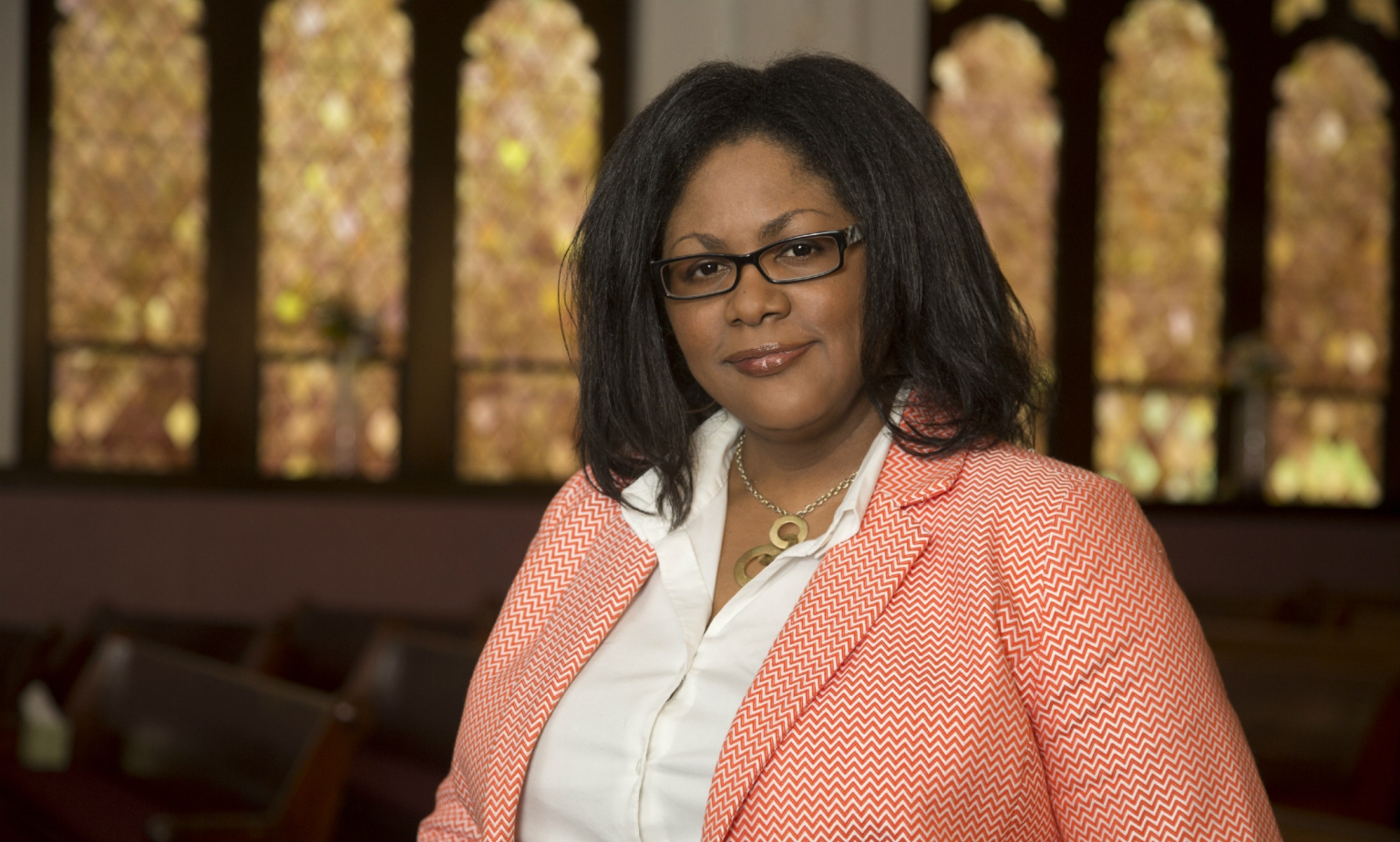 When Chancellor C. Mauli Agrawal needed someone to head the new UMKC Health Equity Institute, he didn’t have to look far. The School of Medicine’s Jannette Berkley-Patton is a leader in community health research — just the right person to direct the institute, which is charged with combining the university’s research strengths with community groups’ grass-roots involvement to identify, quantify and reduce health care gaps.

Berkley-Patton, Ph.D., a professor in the school’s Department of Biomedical and Health Informatics, might be best known for her Taking It to the Pews project, an outreach effort through local churches that gets people tested for HIV. She also is director of the UMKC Community Health Research Group, putting her in an ideal position to bring together the university’s research programs and Kansas City social services groups and agencies.

In the year since Agrawal announced the institute, Berkley-Patton has made sure it got off to a running start. The institute has helped new projects large and small, with the goal of lasting improvements in health across social and economic classes. Anything that might improve health — from providing better transportation and more-affordable care to encouraging better eating and exercise — could be involved.

“We spend billions on health care but are still one of the unhealthiest countries in the world,” said Berkley-Patton, who has degrees in engineering, human development and family life, and child and developmental psychology. “Large federal grants can help create effective programs, but we need sustainable improvements that continue when the grants end.”

Berkley-Patton also is determined to keep the institute’s momentum moving forward, despite the COVID19 disruptions to health care and the wider economy.

“In fact,” she said, “the Health Equity Institute is even more important than ever given that these underserved folks who historically have had more challenges in accessing health care services are likely to be hurt the most by the disruptions.

Get on the bus

One big project for the institute will be tracking how free bus service affects people’s health. This year, Kansas City, Missouri, plans to become the first large city with free public transit — dropping bus fares to zero to match the city’s streetcars, which already are fare-free.

The institute, recognizing a golden opportunity to measure the benefits of free public transit, has drawn up a multi-step research plan and submitted ambitious applications for grants from the National Institutes of Health and the Centers for Disease Control.

She continued, “We know from other research that people who use public transit tend to get 5 to 15 minutes more physical activity than non-riders, just getting to and from public transit. So if free bus service increases ridership, we hope to also see improvements in the health of people in low-income areas.”

The institute will start by gathering baseline data, both from comparable cities’ transit systems and from 500 current riders. The plan for identifying those people and getting data from them has been approved by UMKC’s Institutional Review Board, which ensures that research subjects are treated ethically. That data gathering is on hold over COVID-19 concerns, but the institute is ready to go when the situation improves.

The CDC grant the institute seeks calls for data on 10,000 people, which defies individual recruitment. “So, we’re proposing to collaborate with the Truman Medical Centers,” Berkley-Patton said. “We have identified 11 low-income ZIP codes, and TMC has data on thousands of people that can serve as a measure of the health of those areas.”

Of those patients, the institute hopes to have 4,000 take a brief survey, to gauge some basics about them such as income and incidence of health problems including diabetes and obesity.

The institute also plans to recruit 200 occasional bus riders to track, to see whether free service turns them into regular riders, and whether that improves their health.

Berkley-Patton says the elimination of fares should be a good incentive, saving a regular rider an estimated $1,500 in transit costs. And the research should identify other possible benefits, such as having access to more and better jobs.

“We’ve had lots of collaboration on this already to design research and make our grant proposals,” Berkley-Patton said, ticking off allies from Children’s Mercy, the Kansas City Area Transportation Authority and Public Works Department, UMKC Departments of Economics and Psychology, and the Schools of Dentistry, Medicine, and Nursing and Health Studies.

Now the institute must wait — on whether it gets CDC and NIH money to go full bore on its plans, and on when people can resume more normal living and head to jobs, doctor’s appointments and other activities.

Another project is Youth Engagement in Sports, or YES, led by Joey Lightner and Amanda Grimes, UMKC assistant professors in the School of Nursing and Health Studies. When their proposal received an $800,000 grant from the U.S. Department of Health and Human Services, Grimes described the need to increase activity in middle school students.

“The evidence is very clear that American youth suffer from high rates of obesity, inactivity and poor nutrition,” said Grimes, who has a master’s degree in health science and a doctorate in community health.

“Adolescence seems to be a critical time in a child’s life where behaviors are learned or reinforced. Girls are particularly prone to low rates of physical activity during adolescence.”

The YES program will help students at two Kansas City middle schools, Central and Northeast, said Lightner, who has a master’s in public health with an emphasis in physical activity, and a Ph.D. in kinesiology.

According to Lightner, sixth- through eighth-graders are in a tough place between elementary and high school. “In talking with them, we found out they miss recess. They don’t get to play anymore. And they’re suddenly supposed to be adults, often without all the information they need on health and nutrition.”

One goal of the institute is to come up with innovative programs, and YES is certainly that.

“So after school, we’re going to give them a big, healthy snack and then there’s a physical activity intervention — they get to play,” Lightner said. “We’re going to offer competitive and non-competitive games, because we’ve found that some students gravitate to one kind of sport or another.”

By reaching out to the students and their schools, the program also embodies the institute’s emphasis on community engagement. And it draws heavily on another institute strength — collaboration.

TMC’s Mobile Market, which brings healthy foods to underserved areas, will give students a weekly bag of produce along with recipes. Children’s Mercy consulted on the program, providing its expertise with young people’s health. The Kansas City Department of Parks and Recreation will help with the sports activities.

And Lightner, as director of the UMKC Public Health Program and a new bachelor’s degree under it, has recruited undergraduate students to help gather data — and get first-hand experience in devising and tracking the sorts of programs that could become integral in their careers.

The program’s aim is to help at least 300 students at the schools in summer sessions, and then again in the fall. Of course, the level of disruption and other unknowns caused by COVID-19 make it hard to plan. But when school is back in full swing, Lightner wants YES to be making a difference.

“We know this is a pivotal time for students, especially girls,” Lightner said. “Peer groups are really important; there’s a mentality of, ‘If my friends are doing it, I’ll do it.’ So if we get them engaged in physical activity with their friends at this age, they’re likely to continue. And so many benefits, from physical and mental health to staying in school and achieving academically, have been demonstrated.”

Another goal of the institute is to communicate across the university and among hospitals, government health agencies and community groups. A database is being compiled for training and other resources, along with opportunities to collaborate.

The institute’s new website will be a clearinghouse for everything from health indicators to grant opportunities and processes. That could help community groups connect, for example, with the Health Forward Foundation, a Kansas City fund that promotes healthy communities.

The institute also will be awarding mini-grants, with the aim of giving several community groups a few hundred dollars each for health-related training, software, added staff help and other basics.

Overcoming health disparities is a huge task, made more daunting by the COVID-19 disruptions. But BerkleyPatton and other Health Equity Institute partners have had success in the past and will keep looking for new ways to reshape access to health care.

“It will be a while before we know how much damage the pandemic has done,” she said. “But we do know that research programs that involve people in improving their own health can make a real difference, and it’s going to take all the innovative, collaborative efforts we can build to help those most affected.