A team of paramedics worked together to carefully load the accident victim into an ambulance. The emergency medical personnel continued to monitor the patient while maintaining the necessary life support techniques as the vehicle left the scene.

The scenario is actually a training exercise for Paramedic and Emergency Medical Technician students at the UMKC School of Medicine. 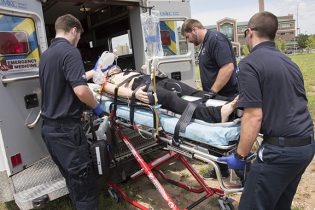 The school’s EMS program purchased an ambulance in May from an emergency vehicle dealer in Toledo, Ohio, who also detailed it with UMKC’s blue and gold colors, the School of Medicine logo and program signage. The rear of the ambulance also displays the Freedom House Ambulance Service logo in honor of the first paramedics in the United States.

After getting the vehicle to Kansas City, EMS education program director Paul Ganss, MS, NRP, NCEE, CHSE, spent a few weeks having it equipped to look and perform like a real ambulance. The ambulance has also been modified to support the use of the school’s high-fidelity simulators, such as its SimMan 3G and SimMom manikins, in the field environment.

Ganss said the vehicle expands the program’s capability of creating a realistic experience and allows students in the School’s Paramedic and Emergency Medical Technician training programs to practice in a unique environment. 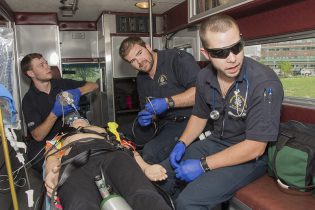 “We can set up calls around the area, put simulated patients out there, and the students go out and take care of them,” Ganss said. “It gives them the experience of working in that environment. Working in a moving vehicle, that is challenging and this makes it more real for the students.”

The ambulance is not used to transport actual patients, but Ganss said it is stocked with equipment that mirrors an actual in-service vehicle. Earlier this summer, members of the EMS education program took the ambulance to Hutchinson, Kansas, to participate in a state-wide field day training exercise at the Kansas State Fairgrounds. EMT students participated in a field operations night in July by responding to mock calls around the Hospital Hill campus.

UMKC’s Emergency Medicine Residency Program has expanded its training as well and uses the vehicle to allow residents to experience what takes place in caring for patients as they are transported to a hospital emergency room.

“Some EMS programs have a mockup of an ambulance to train in,” Ganss said. “What’s unique about our setup is that we’re a medical school that has a training and simulation ambulance and that we have expanded it beyond the EMS students.”

The UMKC School of Medicine Paramedic Program recently received a glowing report and full accreditation from the Commission on Accreditation of Allied Health Education Programs (CAAHEP) for its curriculum and training of future paramedics.

“Accreditation is verification that we’ve been compared to the standard for paramedic training programs and have met that,” said Paul Ganss, MS, NRP, NCEE, CHSE, the school’s EMS education program director. “When they come to our program, students can be assured they’re going to a quality program. They will have the opportunity to gain national certification. They will have the opportunity to be licensed.”

Following a three-day site visit by a two-person team earlier this year, the program received a clean report with no citations. One examiner even referred to the UMKC program as meeting the gold standard for programs in paramedic training.

A peer review of the report conducted by the Committee on Accreditation of Education Programs for the Emergency Medical Services Professions and the CAAHEP Board of Directors recognized the program’s “substantial compliance with the nationally established accreditation standards.”

“There are standards that have been prepared, basically the best practices for training programs across the country. This means our program has been favorably compared to the best programs nationally,” Ganss said.

Paramedics are individuals highly trained to provide medical care including basic and advanced life support to people who suffer injuries or illness outside a hospital setting under protocols approved by a physician medical director.

In 2013, UMKC received a Letter of Review from the Committee on Accreditation of Educational Programs for the Emergency Medical Services Professions as the program sought initial accreditation. The Letter of Review process allows graduates of the program to participate in the national certification examination for paramedics that is required for licensure in many states.

UMKC currently has 11 students training in its paramedic program. A new class of trainees will join the program in January.

Chirakit Hengrasmee, M.D., is an emergency room physician at Vajira Hospital in Bangkok, Thailand. Government, private or volunteer entities operate the emergency medical services in his country. That means that generally, a hospital nurse, or in extreme cases, an emergency department doctor, rides on ambulance calls. At the moment, there is no paramedic service in Thailand.

Hengrasmee hopes to change that.

Working with his hospital and local government organizations, Hengrasmee received a scholarship to come to the United States, learn about its EMS systems and develop a plan to build one of his country’s first paramedic programs. For the past two years, he has studied the EMS program at the UMKC School of Medicine. He recently earned his national paramedic certification through the school’s program.

“The United States has the most developed EMS system in the world,” Hengrasmee said. “I was assigned to come here to learn the system and build my own paramedic program to deal with mass casualties and disasters.”

Hengrasmee explained that emergency service training in Thailand is conducted at university hospitals and medical schools. In Bangkok, a burgeoning metropolis of more than 14 million people, the emergency department at Hengrasmee’s hospital began its first class of paramedic training this past August, while he was in the United States. The plan, he said, is to recruit primarily high school students and current emergency medical technicians and build a four-year, Bachelor of Science degree program for paramedics. His role, when he returns to Bangkok, will be to develop and enhance the curriculum for the final three years of the training.

Hengrasmee said UMKC’s was one of four programs that responded to his nearly 20 e-mails seeking to join an EMS training program in the United States. He chose Kansas City, because of the city’s size and the fact he had common connections with a couple of people at the School of Medicine. He also had a good grasp of American medicine before he came to the United States.

The medical system in his country actually closely follows American guidelines and clinical practices, he said.

“When I was a medical student, we studied in English and even used the same text books as in the United States,” Hengrasmee said. “All the guidelines, the treatments, they are standard, but there are some topical diseases that you never see in the states.”

Hengrasmee supervises emergency medicine residents in Bangkok, with an added focus on EMS operation and research. He did the same at UMKC, teaching pre-hospital skills, while working with emergency medicine physicians Charles Inboriboom, M.D., and Emily Hillman, M.D., on improving the transition of patient care from the paramedic to physicians.

Hengrasmee said that going through the paramedic program at UMKC, where he trained alongside area fire department paramedics, will provide an added benefit to future trainees when he returns to Thailand.

“Before I came here, I essentially had zero knowledge about the paramedic program,” he said. “I used to work only in the emergency department and would rarely ride along in the ambulance. Being a part of the paramedic class, I got the opportunity to study from the beginning how to be a paramedic, and got the experience in the field working with fire departments from Grandview and Harrisonville. The most important part is that I’ve learned from the UMKC program how to teach someone with zero knowledge in the medical field how to become a paramedic.”

His goal now, he said, is not only to teach young students to become paramedics, but also to serve as a role model for future paramedics by sharing his field experience in providing pre-hospital medical services.

“I’m not doing this for myself,” Hengrasmee said. “I’m here to enhance the EMS system in Bangkok and Thailand. The most important thing is to create an effective paramedic program in Thailand.”

Paul Ganss, M.S., NRP, NCEE, CHSE, a nationally certified paramedic, is the education program director for the School of Medicine’s Emergency Medical Services program. He said the field experience Hengrasmee received during his training would prove particularly valuable as he begins training his own paramedics in Thailand.

When the United States started developing its emergency medical service in the 1960s, the first instructors in paramedic training were physicians and nurses, Ganss said. Today, paramedics serve as the primary training instructors.

“For (Hengrasmee) to do something like this is really a big deal because he’s going back (to Thailand) and he’s going to be educating paramedics with an understanding of what a paramedic is and what a paramedic’s job is,” Ganss said. “He is now actually one of his country’s first paramedics.”

Hengrasmee said the goal is to train enough paramedics to have them in all of the government hospitals, and then begin placing them in private hospitals and rural areas of the country. He realizes it’s a lofty goal, but estimates that as many as 10,000 paramedics are needed to cover all of the pre-hospital care needs throughout Thailand.

“I’ve got just 29,” he said of the paramedic class currently training at his hospital back home in Bangkok.

“In the next five to 10 years, we want to transition from nurses to paramedics riding in the ambulance on pre-hospital calls,” Hengrasmee said. “It is going to take time, but you’ll see. Maybe in the next 10 years.”