The American College of Physicians has recognized former UMKC School of Medicine Dean Betty M. Drees, M.D., F.A.C.P., for her distinguished contributions to women in medicine.

Drees was presented the Elizabeth and Emily Blackwell Award for Outstanding Contributions to Advancing the Careers of Women in Medicine at the ACP’s national meeting in Chicago. The award recognizes an individual who has furthered the careers of women medical students, residents and/or physicians through mentoring and leadership development.

A board-certified endocrinologist with 30 years of experience in clinical practice, research, education and administration, Drees has played a major role in advancing the careers and career opportunities for women physicians.

She served as dean of the UMKC School of Medicine from 2001-2014 and established the school’s Excellence in Mentoring awards that recognize faculty members for significant contributions to enhancing and developing the careers of faculty and trainees. In 2018, she was appointed president of the Graduate School of the Stowers Institute for Medical Research, a program offers education and training that leads to a doctorate in biology. She also currently serves as a professor at the UMKC School of Medicine’s Departments of Internal Medicine and Biomedical and Health Informatics and continues to teach endocrinology to medical students, residents and fellows.

Among her many leadership roles, Drees is the immediate past president of the Kansas City Medical Society. She was named one of Kansas City’s Most Accomplished and Successful Women and an icon of education by Ingram’s Magazine. She remains passionate about community well-being and diabetes prevention with a research focus on improving metabolic health and diabetes prevention.

The ACP is the largest medical specialty organization in the United States with 161,000 internal medicine physicians, related subspecialists and medical student members in more than 145 countries worldwide.

Dana Suskind, M.D., a 1992 graduate of the School of Medicine and nationally recognized leader in early language development, will present to 2019 William and Marjorie Sirridge Annual Lecture on Sept. 19.

A professor of surgery and pediatrics at the University of Chicago, Susknid is the director of the Pediatric Cochlear Implantation Program and founder and co-director of TMW (Thirty Million Words) Center for Early Learning + Public Health.

As a surgeon performing cochlear implants in children, Suskind realized her patients’ language skills developed at far different rates. Through her research, she discovered that children who thrive hear millions of words during their early years and wrote a book on her work, Thirty Million Words: Building a Child’s Brain.

Through her Thirty Million Word Initiative, she developed an evidence-based intervention program that is intended to reduce the language gap between children in lower-income families and wealthier households. The program combines education, technology and behavioral strategies for parents and caregivers to enhance the verbal interactions with their children.

Following medical school at UMKC, Suskind completed her residency at the University of Pennsylvania Hospital and a fellowship at Washington University Children’s Hospital.

William T. Sirridge, M.D., and his wife, Marjorie S. Sirridge, M.D., two of the UMKC School of Medicine’s original docents, viewed the humanities as an essential part of a students’ medical training. In 1992, they established the Sirridge Office of Medical Humanities and Bioethics to merge the humanities with the science of medicine. Today, the school recognizes their dedication, compassion and advancement of patient care and medical education in Kansas City with the William and Marjorie Sirridge Lecture. 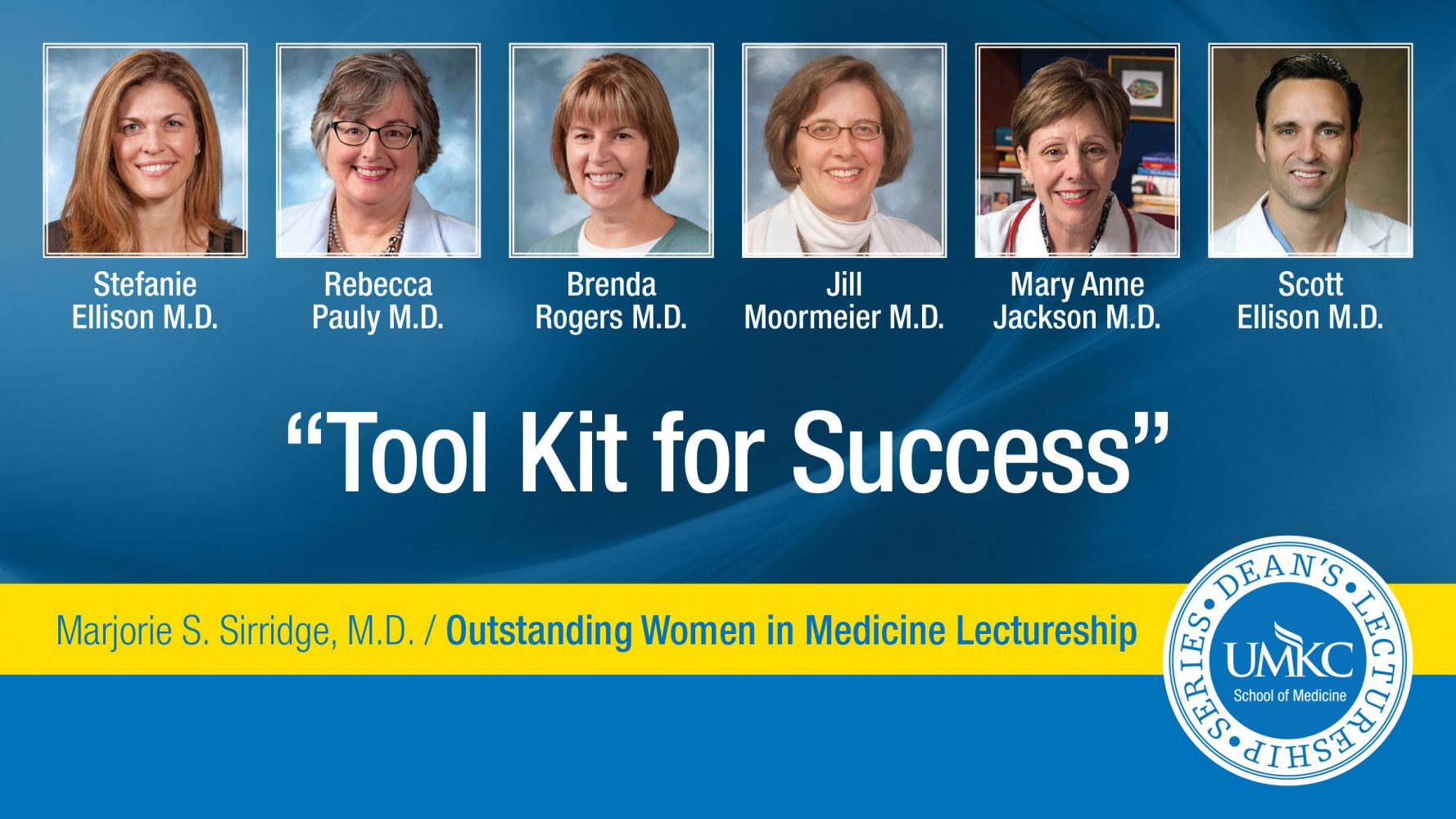 Domestic violence deeply touched the life of Carol Stanford, M.D. ’79, when one of her colleagues was murdered many years ago.

At a Sept. 28 lecture at the UMKC School of Medicine, Stanford shared the story of that crime while exploring what physicians can do about the problem of intimate partner violence.

To illustrate that, Stanford told about reading a newspaper report of a “Johnson County soccer mom” who had been killed, and her businessman husband arrested. She found out a few hours later that the victim was her nurse practitioner.

“This is real and touches each of us,” said Stanford, associate professor at the School of Medicine. Most victims are women in heterosexual relationships, she noted, but men also can be victimized. Abuse also occurs in same-sex relationships and ones involving bisexual or transgender partners.

She went on to say that it’s important for physicians to be aware and look for a wide range of physical symptoms that can indicate abuse, along with psychological problems, including depression, low self esteem, anxiety and substance abuse.

“I’ve started asking routinely, ‘Have you ever been abused?’ or ‘Do you feel safe in your relationship?’ ”

Prenatal care calls for particular vigilance, she said, given women’s vulnerability during that time. The safety of children in an abusive household also must be considered and physicians must report abuse if there are minor children.

In educating future physicians, Stanford said that it’s important to include clinical experience with victims, and suggested integrating more education about intimate partner violence into the curriculum. Students are becoming more aware of the issue through their community involvement, such as volunteering at such places as the Rose Brooks Center for domestic violence victims.

Stanford also said it was important for physicians to do their part because to raise awareness and battle domestic violence. An abused partner’s situation can be difficult and complicated, so a physician may provide a confidential ear, limited by the need to report child endangerment. The criminal justice system, a victim’s employer and other institutions simply can’t address the problem alone, she said.

“I think it’s important that we empower patients, because they are the expert on their own situation.”

As violent as the world is, Stanford says she is optimistic. “I think the key to solving this, ultimately, is gender equity. We need a multi-disciplinary educational approach.”

Stanford is a longtime faculty member and docent, known for her dedication to students and involvement with their activities. She has served as faculty adviser or sponsor for many students groups and programs, including the Gold Humanism Honor Society, the UMKC chapter of the American Medical Women’s Association and Camp Cardiac.

At the lecture she thanked her husband, James Stanford, M.D. ’80, and son, Ian Stanford, both in attendance. She also thanked the several members of the Sirridge family present and praised the late Drs. William and Marjorie Sirridge as giants in the success of the School of Medicine and its “humanistic approach to interacting with patients.”

The Marjorie S. Sirridge, M.D., Outstanding Women in Medicine Lectureship was established in 1997 to recognize her dedication, compassion and advancement of patient care and medical education in Kansas City.