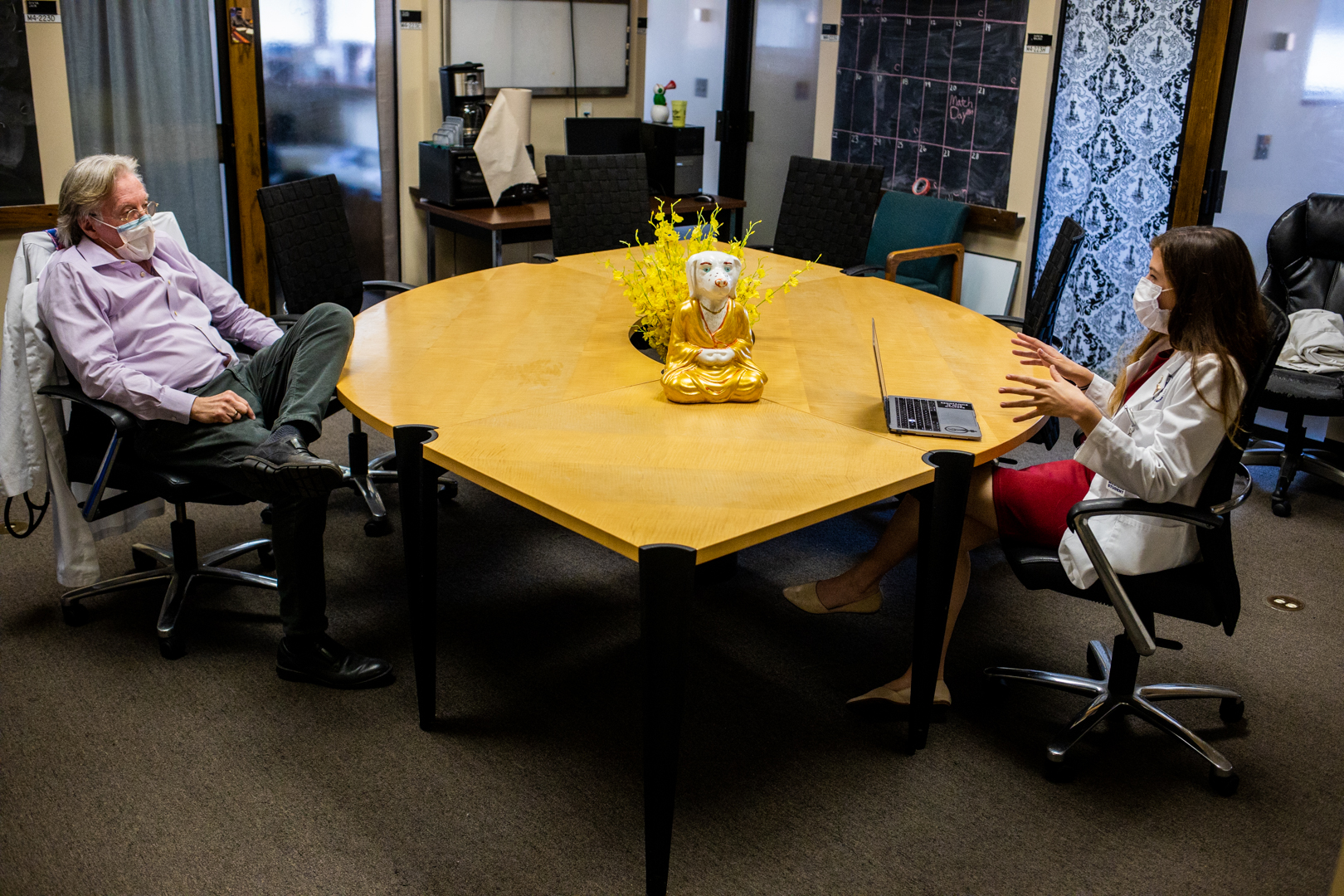 Faith Mueller wants to become an obstetrician/gynecologist and change the world. David John, M.D., believes she will and is mentoring her on that path. When each talks about the other, it’s clear that their inspiration is mutual.

“Early on, I became enveloped in the world of women’s liberation,” said Mueller, who is entering her last year of the UMKC School of Medicine’s six-year B.A./M.D. program. “I started reading stories of female genital mutilation, of sexual violence, of the pregnancy circumstances in areas of instability. These were stories that I could not shake, and I knew I had found my vocation.”

When she graduates, Mueller plans to find a role in women’s global health after serving her OB/GYN residency.

John, a member of the six-year program’s original graduating class in 1977, had a long career in rheumatology in Hawaii and returned to UMKC three years ago to teach and mentor students as a docent, the teaching physician for a small “docent unit” of medical students. He and Mueller met when she joined his docent unit.

“Our students are all bright and uniquely talented,” John said, “but it is rare to have a student like Faith Mueller. In addition to exceptional capabilities, Faith has the drive and the initiative, the passion, to do great things in her career. I hope to live long enough to see her early accomplishments to improve the health of women at a global level.”

“Dr. John … approaches medicine with an empathy that is sustainable and rooted in ideas of equality. He stands for a world that is better for the people he serves.” — Faith Mueller

Her drive to get started in medicine as soon as possible led Mueller to UMKC, where she could get her M.D. two years sooner than at other universities. But in John, who as a young man envisioned being a professor of English literature, she found a mentor who also emphasized the humanities and appreciated her desire to help others.

“Dr. John is unwaveringly kind and takes the effort to see the humanity in everyone, no matter how they come to him,” Mueller said. “He approaches medicine with an empathy that is sustainable and rooted in ideas of equality. He stands for a world that is better for the people he serves.”

Her mentor’s personality and commitment also make learning medicine less daunting. “I know I can always ask questions, whether about patient care, navigating the medical field, or life in general,” Mueller said.

In turn, John said, Mueller and his other students have inspired and renewed him.

“I had become intellectually complacent, emotionally placid, professionally successful but somehow not complete,” John said. “When I was a medical student here in the 1970s, certain docents showed me what it really means to wear the mantle of the physician within society. I viewed it as a great gift. This knowledge kept me true to the profession; it kept me grateful that my purpose was to help people suffer less and live healthier. When I decided it was my turn to give back, life got exciting again.

“Faith has the drive and the initiative, the passion, to do great things in her career. I hope to live long enough to see her early accomplishments to improve the health of women at a global level.”
— David John

“As Faith’s mentor, I feel my major purpose is to be a sounding board and a cheerleader. Her accomplishments are her own; she created her own goals. Mueller said she appreciates his support: “Dr. John inspires me to live boldly. I feel like I can ‘go for the gold’ knowing that I have someone within the faculty who will have my back and advocate for my success.”

The med school’s docent system gave Mueller her opportunity to find a mentor, but she encourages other students to actively seek out mentors if a mentor relationship doesn’t develop naturally. “Keep your mind open for who would be a good mentor,” she said. “They don’t have to be in your field or occupation. Find someone that helps you grow as a person. Look for someone who inspires you.”

The School of Medicine has announced the appointment of Gary Sutkin, M.D., as the associate dean of women’s health and the Victor and Caroline Schutte Chair in Women’s Health. Sutkin will begin work July 18 at Truman Medical Centers.

Sutkin is a gynecologist, surgeon and researcher who has worked since 2006 at Magee-Womens Hospital of the University of Pittsburgh School of Medicine. He is an associate professor and master educator in the urogynecology division of the obstetrics, gynecology and reproductive sciences department.

“We are fortunate to add Dr. Sutkin to the faculty at the UMKC School of Medicine,” said Steven L. Kanter, School of Medicine dean,  who worked with Sutkin at the University of Pittsburgh School of Medicine for eight years. “His top priority is the health of his patients, and I know he will make a difference in the lives of many Kansas Citians.”

Sutkin’s endowed chair position, one of 22 at the School of Medicine, is sponsored by an endowment donated specifically for women’s health. Endowed chairs ensure academic excellence in teaching and research. Sutkin says he is honored to receive the position and looks forward to moving to Kansas City with his wife and their two sons, ages 8 and 4.

“I want to be an excellent physician here, and I believe I can improve women’s health in a number of ways through my emphasis on patient safety, communications in the operating room and research,” Sutkin said. “I appreciate the vision of Dean Kanter. He’s building something special as a strong leader in health care and research, and it’s exciting for me to be a part of that.”