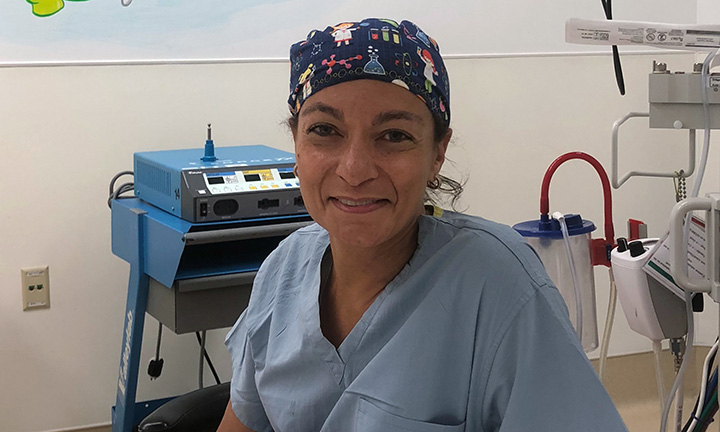 Her maternal grandfather, throughout most of his career as a general practitioner in Mississippi, was the only black physician in a nearly 100-mile radius. Thompson watched him and learned about commitment to patients and community. She saw the endless drive for excellence and the longing to provide patient care where it was sorely needed.

Her father, in the midst of the Civil Rights Era, was among the first black physicians to enter the integrated obstetrics/gynecology residency program at Kansas City General Hospital. As she grew older, Thompson accompanied her father to the hospital, and during her high school years she worked in his Kansas City, Kansas, practice. She was even one of the early graduates of the UMKC School of Medicine’s Summer Scholars pipeline program for area high school students.

Now, Thompson is a third-generation African-American physician who embodies those same family characteristics, the drive for excellence and a thirst to assure access to medical care for those in need. Those traits also made her a natural for the School of Medicine’s 2020 E. Grey Dimond, M.D., Take Wing Award winner.

Thompson delivered this year’s Take Wing lecture online to a School of Medicine audience on May 19.

Thompson serves as the Lauren D. Holinger Chair of Pediatric Otolaryngology at the Ann & Robert H. Lurie Children’s Hospital of Chicago, and a professor of otolaryngology head and neck surgery at the Northwestern University Feinberg School of Medicine.

Working in Chicago, where the population is diverse and ranges across socioeconomic backgrounds, Thompson is on a personal mission to educate others about the unintended consequences of bias in health care delivery.

“At this point in my career, I think that’s what I’m most passionate about,” Thompson said. 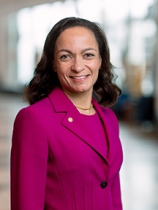 After graduating from the School of Medicine, she completed her residency in otorhinolaryngology head and neck surgery at the Mayo Clinic. She followed that with a fellowship in pediatric otolaryngology at Cincinnati Children’s Hospital where she trained under the pioneer of pediatric airway surgery, Dr. Robin Cotton.

Throughout a 23-year career in academic medicine, Thompson has become a leader in pediatric airway and swallowing disorders. Her landmark research in laryngomalacia made her a world authority and transformed the medical and surgical management of the condition, the most common cause of infant stridor, a high-pitched wheezing caused by disrupted airflow.

Thompson spent most of her career at the Mayo Clinic, where she became the inaugural chair of the division of pediatric otolaryngology.

“What an opportunity that was – at age 32, to build a program from scratch and create a service line at a world-class organization,” she said.

The experience also helped her understand that she wanted to have the same sort of impact in an urban setting at a major academic children’s hospital. So, when the opportunity arose to lead the division of otolaryngology at Lurie Children’s Hospital, Thompson made the move.

Now a surgeon and administrator, she also serves as vice chair of the Department of Surgery and executive director for the hospital’s ambulatory practice.

Much of her work in the operating room involves highly specialized, complex, high-risk surgeries on children with obstructions in the upper airway. With the onslaught of the coronavirus, the procedure is of particular high risk for transmission of the virus to health care workers. As a result, Thompson has been busy helping the hospital and her surgical teams adjust to new, safer ways to provide such patient care.

“We’re taking different processes in the operating room in terms of protecting our team with personal protection equipment, while assuring a safe environment to deliver care to children in need,” she said. “We’ve even changed some minor details of how we ordinarily do surgeries to prevent virus aerosolization during surgery. It’s rapidly changing and evolving. We’re going to have a whole new way of doing things.”