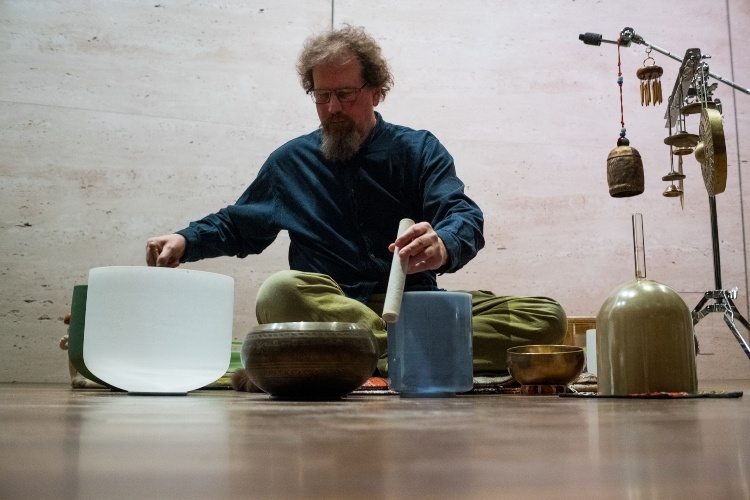 Paul Rudy has always been fascinated with sound. He’s ridden the sound waves to many impressive achievements as a composer, performer, Guggenheim Fellow, Fulbright Fellow, artist and sound healer. He’s currently the Curator’s Distinguished Professor, but his path to UMKC and the honorary title “High Priest of Sound” was as winding as the labyrinth he created on his Kansas farm.

“I understood the power of sound when I was a kid,” Rudy recalled. “My sister was watching a horror movie, and I was behind the couch playing. I heard this sound, and I stood up and started watching. It totally sucked me in. That movie scared the crap out of me! But I knew it was that sounds that drew me in.”

Rudy’s fascination with sound continued into his college career, even when he thought it wouldn’t.

“I did a jazz trumpet degree at Bethel College in Newton, then I quit music altogether and became a mountain climber and carpenter for four or five years,” he said. “That wasn’t stimulating my brain enough, though. I’ve been chasing my tail my whole life.”

The chase would bring him back to music in the late 80’s, when he joined a composition class at Wichita State University. It was there that he composed a piece of music his instructor described as graduate work. Invigorated by this taste of success, he applied for a music composition program at the University of Colorado and earned an assistantship in the program.

“I discovered the studio, and I fell in love with actually making and sculpting sound,” Rudy reminisced. “That’s why I went the electronic route.”

“Paul is a scientist.When I think of people in the Conservatory, I think of creators, musicians and artists, but I never think of science. And yet, Paul’s brain thinks like a scientist. He comes up with scientific principles, questions for us to analyze, and then he’s really good at analyzing data and distilling it down to what we need to answer our questions.”
– Gary Sutkin, M.D., director, Surgical Innovations Laboratory

It was this interest in electroacoustic music that would provide him with another opportunity in his academic career. This time, at UMKC’s Health Sciences Campus, working in tandem with Dr. Gary Sutkin, professor of surgery and associate dean of women’s health at the UMKC School of Medicine. Together, the two are studying how sounds in the operating room can affect health outcomes for patients during surgery.

“Paul is a scientist,” said Sutkin of his colleague. “When I think of people in the Conservatory, I think of creators, musicians and artists, but I never think of science. And yet, Paul’s brain thinks like a scientist. He comes up with scientific principles, questions for us to analyze, and then he’s really good at analyzing data and distilling it down to what we need to answer our questions.”

“I think my study with electroacoustics and knowing how the brain processes sound brought me to the operating room study,” Rudy says. “Sound is vibrating on us, acting upon us all the time. Every time we hear sound it’s not just hitting our ears; it’s hitting our whole body. There was a part of me that was excited about offering something other than just the study of music. This seemed to be an opportunity to take that work into a deeper, more significant arena, and it’s still unfolding.”

“We’ve been studying it for about two or three years, and we’re going to study it for about another 20,” said Sutkin, only half-jokingly. “We’re not the first ones to measure the sound environment, but I think we are the first ones to really delve into what we call ‘speech communication interference,’ when someone says something, and the other person doesn’t hear them. There are so many machines that are making loud noises, multiple conversations going on. We’re measuring those interferences, then I think we can make recommendations.”

Those recommendations could one day save lives by changing the very nature of how operating rooms are built and managed. For now, the pair are happy with the success they’ve seen, having been published in one medical journal, with a second article currently under review.

Rudy considers research a part of his creative process, satisfying his analytical side so as not to hinder creative flow while making his art. “The brain is really good at cataloging and organizing things, but the spirit knows how to make the best use of it all.” That was the realization, Rudy says, when creating became fun. “I felt like I had all these resources starting to really work together and complement each other.”

Rudy’s creative spirit carries well beyond music. Settled on 70 acres, north of Lawrence, Kansas, you’ll find Harmony Farm, a home as interesting and eccentric as the man who lives there.

“It’s become a canvas, of sorts, that I photograph and that I use to make modern day ‘Nazca Lines,’” says Rudy, referring to massive and mysterious geoglyphs etched across Peru’s Nazca Desert. While Rudy openly admits to keeping a quiet social life outside of the farm, he’s ever eager to share his passions with students at UMKC.

“Over the last ten years, I’ve started to love teaching,” Rudy says. “It went from being part of the job to something I really look forward to doing. Part of what I love is staying in touch with young people.”

“Paul is one of the most generous people I know, and one of the most open thinkers,” said Andrew Granade, former interim dean of the Conservatory. “I’ve been on dissertation graduate committees with him many, many times with his students, and they all sound like themselves. He has a unique ability to listen to them, respond to them and help them grow into the artist they need to be.”

Rudy challenges his students to find fresh perspectives, and he does so with zest, teaching a general education course he calls the artist in society.

“I’ve had students tell me they’ve never seen a piece of art before, I’ve had students tell me they’ve never had a conversation with someone they disagreed with before,” Rudy says. “And I just love seeing what happens when they have those new experiences. Part of my job is mentoring them into those new experiences. I present them with some really uncomfortable stuff, sometimes purposefully, for them to learn how to witness what happens in them when things get uncomfortable.”

“Paul is very Socratic in his teaching style,” said Granade, “I imagine the first couple of weeks it’s a little bit uncomfortable for them, because any time you have your beliefs or thoughts challenged, it’s uncomfortable. But what he’s doing is basically saying this is the role of the artist, literally the role of the artist in society is to open up these dialogues.”

Rudy says he wants students to think about the ways they act and react. How do they navigate obstacles? How do they learn and grow?

It’s a practice he recently had to exercise himself. But through a painful experience, he says he’s found one of his proudest moments.

Rudy’s long-time friend, poet Jay Hopler was 51 years old when he lost his battle with cancer in June. The two had studied together at the American Academy of Rome in Italy.

“In 2017, Jay was thinking about a poem that would describe himself, and he asked me, ‘If I were a piece of music, what would I be?’” Rudy says the melody was instant. “I heard the music in my head. That doesn’t happen often. Most of the time, it’s hard work, but I knew exactly what Jay sounds like.”

Holding up a copy of still life, Hopler’s final published book of poetry, Rudy turned to the last page of the closing entry, where just a few bars of music were included with the poet’s words.

“It’s the second-to-last line, even,” he notes. “I don’t think anybody’s ever done that before. A little piece of music, describing this poet, is part of his obituary poem. I didn’t know that until I saw the final copy of the book. I’m actually considering making a whole piece in memoriam of him to celebrate his amazing words and amazing life.”

It’s there Rudy shows his spirit again. His spirit for life, healing and creation through sound, even when faced with the loss of a friend. It’s this unique mindset that has pushed him to find success time and time again, both personally and professionally.

It’s this ability to reshape his own perspective that’s given Rudy new love for everything he does.

“I think that’s when my academic career started to change. When I realized it’s not the responsibility of my job to give me fulfillment, that’s my responsibility to find fulfillment in what I’m doing. I love these interesting collaborations that I’m constantly on the lookout for. Teaching is one of those collaborations between me and the generation that’s going to rule the world someday. How cool is that?”