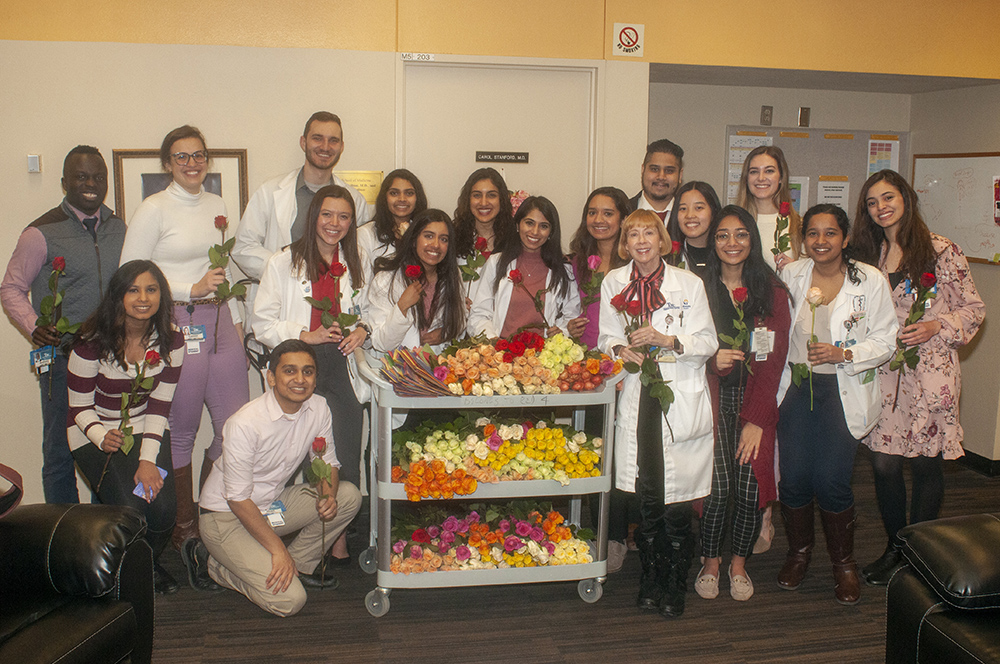 More than a dozen UMKC School of Medicine students displayed the humanistic side of medicine on Valentine’s Day. The students, members of the school’s Gold Humanism Honor Society, delivered more than 200 roses and hand-made Valentine’s cards to their patients at Truman Medical Center Health Sciences District during their lunch hour.

“This reinforces the idea that our patients are not just patients, they’re also human beings,” said sixth-year student Rmaah Memon.

The fifth- and sixth-year students and their Gold Humanism Honor Society faculty sponsor, Carol Stanford, M.D., have been handing out roses to their patients for Valentine’s Day as part of the organization’s Solidarity Week for Compassionate Patient Care since 2011.

A few years ago, the students began inviting their classmates to join in on the Solidarity Week campaign by getting together during the week to create hundreds of their own hand-made Valentine’s cards to pass out with the roses.

“A lot of these patients are here on Valentine’s Day all alone,” said Athira Jayan, a sixth-year student. “You’re handing them a rose, but you’re also getting a chance to just visit with them, give them some company. A lot of patients here, that’s something that they value, the ability for someone to comfort them and give them someone to talk to.”

Elsa George, another sixth-year student, said this is an opportunity for the students to show their patients that someone cares.

“Sometimes, when we come into their room and just talk to them briefly about their medical conditions, patients think we don’t really care about how they feel as a person,” George said.

The organization has nearly 180 chapters in medical schools and residency programs throughout the United States.