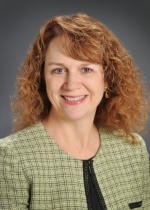 The UMKC School of Medicine has announced that Jeanne M. James, M.D., FAAP, MBA, has been named the school’s new chair of the Department of Pediatrics. James will also serve as pediatrician-in-chief at Children’s Mercy and pediatrics department chair at the University of Kansas School of Medicine.

“Dr. James has incredible expertise and experience that will further enhance the academic excellence of Children’s Mercy and I look forward to working with her on behalf of our students” said Mary Anne Jackson, M.D., dean of UMKC School of Medicine.

Most recently, James served as chief of cardiology at the Medical College of Wisconsin (MCW) and held the Leigh Gabrielle Herma Endowed chair for cardiology and served as the medical director of cardiology for the hospital.

Before joining MCW in 2017, James spent more than two decades at Cincinnati Children’s Hospital and the University of Cincinnati advancing through the academic ranks, ultimately achieving the rank of professor and earning progressive leadership roles. She began at the academic rank of instructor in the Department of Pediatrics, a faculty position accompanying her appointment as a Proctor Scholar in the department and a post-doctoral fellow in the laboratory of Jeffrey Robbins, Ph.D..

Throughout her career in Cincinnati, James continued working with the lab and developed many productive research collaborations. In addition, she served the Heart Institute as Pediatric Cardiology Fellowship program director, medical director of Cardiovascular Genetics and director of the Mouse Echocardiography Core. Among other roles, James served the University of Cincinnati as chair of the Department of Pediatrics Reappointment, Promotion and Tenure Committee and was a member of the Cincinnati Children’s Hospital Institutional Review Board.

James earned her bachelor’s degree in chemistry at West Virginia University and went on to the West Virginia School of Medicine. At 20 years of age, she was the youngest member of her class, but was widely recognized not for her age, but for her early achievements and leadership. She completed her pediatrics residency at Vanderbilt University Medical Center, followed by her fellowship in Pediatric Cardiology, also at Vanderbilt. During this time, she was a research fellow in the Molecular Physiology and Biophysics lab of Michael M. Tamkun, Ph.D.

A year-long, national search to fill this position was co-led by Drs. Shawn St. Peter and Tamorah Lewis and included many representatives from UMKC School of Medicine, Children’s Mercy and KU Hospital.

“I thank all who played a role in helping us fill this important position – expectations were high and the committee delivered,” said Jackson. “No doubt Dr. James will be a leader and a great addition to our faculty.”