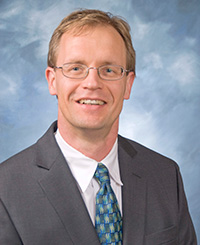 The UMKC Board of Trustees has selected UMKC School of Medicine’s vision and neuroscience researcher Peter Koulen, Ph.D., as the recipient of the 2020 UMKC Trustees’ Faculty Fellow Award.

Dr . Koulen is the school’s Felix and Carmen Sabates/Missouri Endowed Chair in Vision Research and serves as director of basic research at the Vision Research Center. Under his guidance, the research center and the UMKC Department of Ophthalmology have secured millions of dollars in grants from the National Institutes of Health and other recognized sources for their groundbreaking work in developing technology and therapies to recognize and treat chronic diseases of the eye and brain.

He has been awarded more than 50 extramural grants totaling over $15 million, and he recently was the recipient of two R01 NIH/NEI awards totaling over $4 million. With a focus on the retina as part of the central nervous system, he has peer-reviewed publications in more than 100 prestigious journals including International Journal Molecular Science, Journal of Cell Science, Cellular Molecular Neurobiology, and Neuroscience. He also has been awarded three patents.

A member of an NIH study section committee, and active reviewer for prestigious scientific journals, he has been the recipient of more than 20 awards and honors since joining our School of Medicine, including recognition as the NT Veatch Award for Research and Creativity in 2013. Dr. Koulen’s work has been acknowledged worldwide. The Association for Research in Vision and Ophthalmology, a global organization of researchers, honored Koulen as a member of its 2018 Fellows Class.

He also serves as a mentor and sponsor for students involved in research and he has effectively launched the careers of the next generation of physician scientists. His mentorship has placed graduates in highly competitive research environments such as NIH, FDA, Harvard Medical School, Alcon Laboratories, Fresenius and numerous others.

“I am impressed that Dr. Koulen contributes with passion, grace and enthusiasm and that he truly represents what a faculty scholar should exemplify,” said School of Medicine Dean Mary Anne Jackson, M.D.. “It is my pleasure to call him a colleague and to work with him at our University.”

Each year, UMKC’s Board of Trustees selects an established faculty member for the Faculty Fellow Award to honor a nationally and internationally recognized record of research and creative achievements at UMKC.

Yusheng Liu, Ph.D., vice chancellor for research in the Office of Research and Economic Development, said the award helps the university enhance and pursue its goal to be a major urban research university with excellence, creativity, and scholarship across all disciplines.