That was the message of Susan M. Mou, M.D., an associate professor in the School of Medicine’s Department of Obstetrics and Gynecology, who delivered the Marjorie S. Sirridge, M.D., Outstanding Women in Medicine Lecture on Sept. 15 at the school.

Mou started her address, “Ethics in Reproductive Medicine,” by saying she was a general obstetrician/gynecologist and “not a bioethical scholar.” Rather than offering answers, she wanted to share what’s going on “in the trenches” and get students thinking about ever-present ethical issues.

Mou said such issues and questions had existed throughout her career, starting with her residency at the University of Rochester, when steroid use for likely premature deliveries was relatively new. The questions have kept changing, she noted, with advances in many areas, from in vitro fertilization and reproductive endocrinology to HIV treatment.

Such questions often involve weighing possibly competing interests, Mou said, such as fetal health versus maternal health, or a mother’s autonomy and emotional needs versus what appears best for her physical health.

Difficult pregnancies make for difficult questions, such as when a fetal condition makes a live birth unlikely, and interventions to promote live birth might not be in the mother’s long-term health interests. But physicians must consider whether to take those steps, and how far to go with them, Mou said, when the mother has expressed a great desire for the chance to hold her live baby. 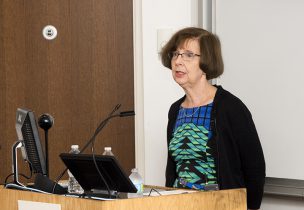 According to Mou, the models for evaluating such questions also have evolved, so that a woman’s culture and living conditions and communal network can be considered, along with traditional principals such as autonomy, justice and beneficence.

Treatment and care can be more effective, for example, when they account for barriers such as transportation and work schedules, rather than judging a woman for missing neonatal care appointments. Mou also said approaches that see care for pregnant women as the best way to also care for their developing fetuses can overcome past perceptions of conflict between maternal and fetal well-being.

The growth of bioethics studies and decision committees has resulted in practicing physicians getting more help and support in making the toughest calls, Mou said.

“We need to be aware of ethical principles and practices. We need to utilize ethics committees and other resources. It’s so important to have the Sirridge Office of Medical Humanities & Bioethics” at the School of Medicine.

Though Mou claimed no credentials as a bioethicist, she has been a leader in women’s health teaching and treatment for more than three decades.

Her Sirridge lecture followed more than 90 presentations she has given from coast to coast, including Milestones and STI Lectures at UMKC. Mou’s more than 60 publications include research studies, book chapters and abstracts. She provides peer review for the Journal of Maternal-Fetal & Neonatal Medicine and for abstracts for the American College of Obstetrics and Gynecology.

Mou began teaching at the School of Medicine in 1984. She was director of the school’s residency program in obstetrics and gynecology with Truman Medical Centers and Children’s Mercy Hospital from July 2012 to September 2014. Mou was section chief for gynecology surgery at Children’s Mercy in the 1990s.

Several members of the Sirridge family attended the lecture this year. The Marjorie S. Sirridge, M.D., Outstanding Women in Medicine Lectureship was established in 1997 to recognize Dr. Sirridge’s dedication, compassion and advancement of patient care and medical education in Kansas City.