Medical students across the country can thank Vaishnavi Vaidyanathan for helping them pass their U.S. Medical Licensing Exam.

Vaidyanathan, a fifth-year medical student at the UMKC School of Medicine, is a contributing author to the newly-released 2017 edition of the study guide, First Aid For the USMLE Step 1. As medical students prepare for the first of the three-step medical board examination, nearly all of them turn to book as a study tool.

“The fact that what I’m doing is able to make a difference, helping another student get one point here or one point there to get the best score they possibly can is the biggest benefit to me,” Vaidyanathan said. “Even more than the recognition of being a contributing author.” 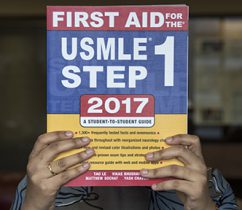 Medical students typically take the Step 1 exam following the basic sciences portion of their curriculum. At UMKC, that generally comes near the end of the students’ fourth year. Students at traditional four-year medical schools usually take the exam at the end of their second year.

Vaidyanathan was actually in the midst of studying a 2016 copy of First Aid in preparation to take the Step 1 exam when she decided to help with the editing process for the next edition of the guide.

Publishers of the study guide encourage feedback and comments from students on how to improve the manual and their online study resources. Vaidyanathan started her editor’s task by combing through the student feedback and comments. She continued working on the book after she took the Step 1 exam last May .

As a contributing author, Vaidyanathan was part of a team that reorganized the entire chapter on neurology to incorporate updated information and make it easier for students to memorize.

“While I was doing my studying, because I was reading it so carefully, I was writing things down that I though would be useful for future students,” Vaidyanathan said. “It was nice to have those comments incorporated into the next book.”

During the most intense editing periods, prior to publication, Vidyanathan says she spent as many as three or four hours a night combing through the comments and preparing the new text. Though it made for a time-intensive project, she said it was all worth the effort.

“First Aid is something that helped me a lot, so I wanted to give back and be part of the process,” Vidyanathan said. “I really like medical education in general, so this was something that I was very happy to be a part of.”