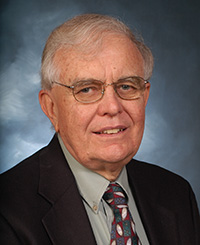 Long-time UMKC School of Medicine faculty member and docent Lynn DeMarco, died on Feb. 15 in Leawood, Kansas. He was 85.

Interim Dean Mary Anne Jackson, M.D., was a member of Dr. DeMarco’s docent unit as a student at the School of Medicine.

“As one of the first students on his docent unit in 1977, I remember him as positively engaged with students, a wonderful clinician who always had a smile on his face.”

Jim Wooten, Pharm.D., said he remembered how years ago Dr. DeMarco helped him fit in as a new member of the School of Medicine faculty.

“At least once a week, when he used to have a clinic at TMC, I would drop by for a visit,” Wooten said. “I would get lots of clinical questions from him when he had a clinic here and at TMC Lakewood although I believe many questions were more to make me feel good about myself rather than me helping him much.  He was a good man and extremely bright.  I have no doubts that his patients will miss him and so will I.”

Before coming to Kansas City, he was in private practice at the Donahoe Clinic, later Central Plains Clinic in Sioux Falls, South Dakota.