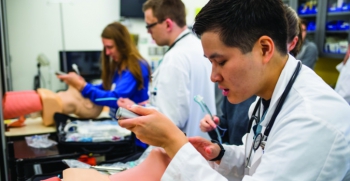 For the first time ever, the UMKC School of Medicine joined the U.S. News & World Report rankings of medical schools and other graduate programs.

The  school placed 75th for primary care medical schools and 88th for research medical schools. U.S. News said its rankings covered 122 accredited medical and osteopathic medical schools that participated in the rankings, out of 189 that were asked.

UMKC, whose innovative six-year program takes most of its students right out of high school, did not participate in past surveys because its program is so different from others in the United States. Interim Dean Mary Anne Jackson, a 1978 graduate of the program, said she thought it was time to join the survey.

“Our school is known for excellent clinical training and great success in residency matching, throughout the Midwest and at Mayo and other top institutions,” Jackson said. “We also offer expanding research opportunities and have placed students in the top National Institutes of Health student research program for several years in a row.”

The medical school rankings were based on a weighted average of indicators, seven for the primary care rankings and eight for research. Some indicators were quality assessments by academic peers and residency directors. But most were objective data submitted by the schools, such as research activity, student test scores and acceptance rate. The UMKC school rated in the top one-third, for example, in faculty-student ratio, on a par with Stanford, the No. 4 school overall, and ahead of 78 other schools. It also did well in the percentage of its graduates going into primary care.

Dean Jackson said it took a “yeoman’s effort” to compile and submit the required data for the first time, and she thanked the school’s leadership team including Vice Deans Steven Waldman, M.D. ’77, J.D., and Paul Cuddy, Pharm.D., M.B.A., for their efforts.