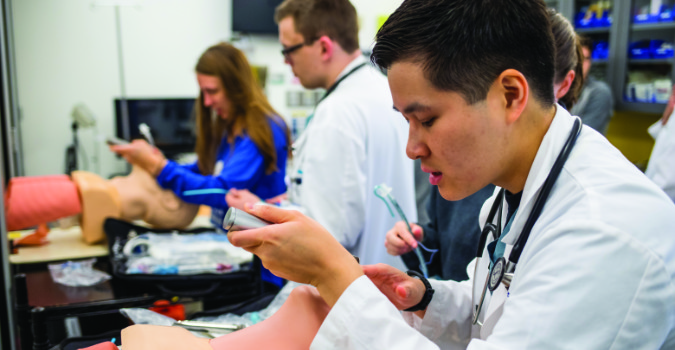 The UMKC School of Medicine was the highest-ranked medical school in Missouri for Primary Care in the 2023 graduate school rankings by U.S. News & World Report.

UMKC’s ranking of no. 52 in the nation was up 12 places from last year’s rankings. Other Missouri medical schools that made the rankings included Washington University and Saint Louis University, tied at no. 56; and the University of Missouri-Columbia, no. 67.

The school of medicine also ranked 29th among schools with the most graduate physicians practicing in medically underserved areas. It also ranked 85th for research medical schools, up three spots from a year ago.

“The UMKC School of Medicine opened its doors more than 50 years ago on our Health Sciences District campus with a commitment to serve the people of Missouri,” said Mary Anne Jackson, M.D., dean of the UMKC School of Medicine. “We are leading the way as we provide the highest quality programs to educate our next generation of outstanding health care professionals and provide the highest quality of care to our community and beyond.”

Jackson noted that the UMKC medical program is built on the enduring vision of Dr. E. Grey Dimond. Students experience an innovative curriculum, care for patients in clinical settings from day one, and learn in small teams led by docent physician mentors, who emphasize a humanistic approach to medicine. And now UMKC’s model takes place not only on the Kansas City campus but in St. Joseph, Missouri, serving a more rural population.

Earlier this year, in its annual ranking of online graduate programs, U.S. News ranked the online graduate nursing program at the UMKC School of Nursing and Health Studies among the nation’s top 50 for the tenth consecutive year.