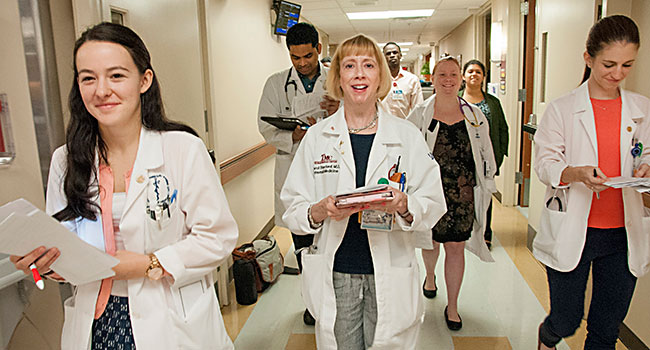 In 1971, UMKC’s School of Medicine opened with a unique way to teach and train tomorrow’s physicians. Nearly 50 years later, the school’s accelerated, dual-degree program continues to take students straight from high school and immerse them in an integrated curriculum consisting of liberal arts, basic sciences and clinical medicine.

The result? More than 3,300 graduates from the UMKC School of Medicine, the majority of whom have earned both their bachelor’s degree and medical degree in just six years versus the eight years typical for most medical school graduates.

Upon entering the B.A./M.D. program, students are classified as professional students. They begin studying medicine on their first day and clinical experience begins immediately. The initial two years also include courses leading to bachelor degrees in liberal arts, chemistry, or biology. Clinical experiences increase in the third year, where students work together one-half day a week in an outpatient continuing care clinic and also on two-month internal medicine rotations throughout each of their final three years.

“This program provides immediate, weekly clinical experience that keeps you motivated throughout your coursework,” said one student, “It gives you early patient exposure that traditional programs do not offer until the beginning of third year.”

The six-year concept took shape in 1968 when E. Grey Dimond, a cardiologist and former chairman of medicine at the University of Kansas, spearheaded a new medical school at UMKC. He used his own medical education as the stimulus for his six-year plan: Prior to World War II, the military condensed medical school to 36 rigorous months, with no spring or summer breaks, to quickly churn out much-needed physicians. Dimond was among these military graduates.

“That experience was so stimulating to me,” he said. “That sense of urgency kept me enthusiastic all through my years (of medical school).”