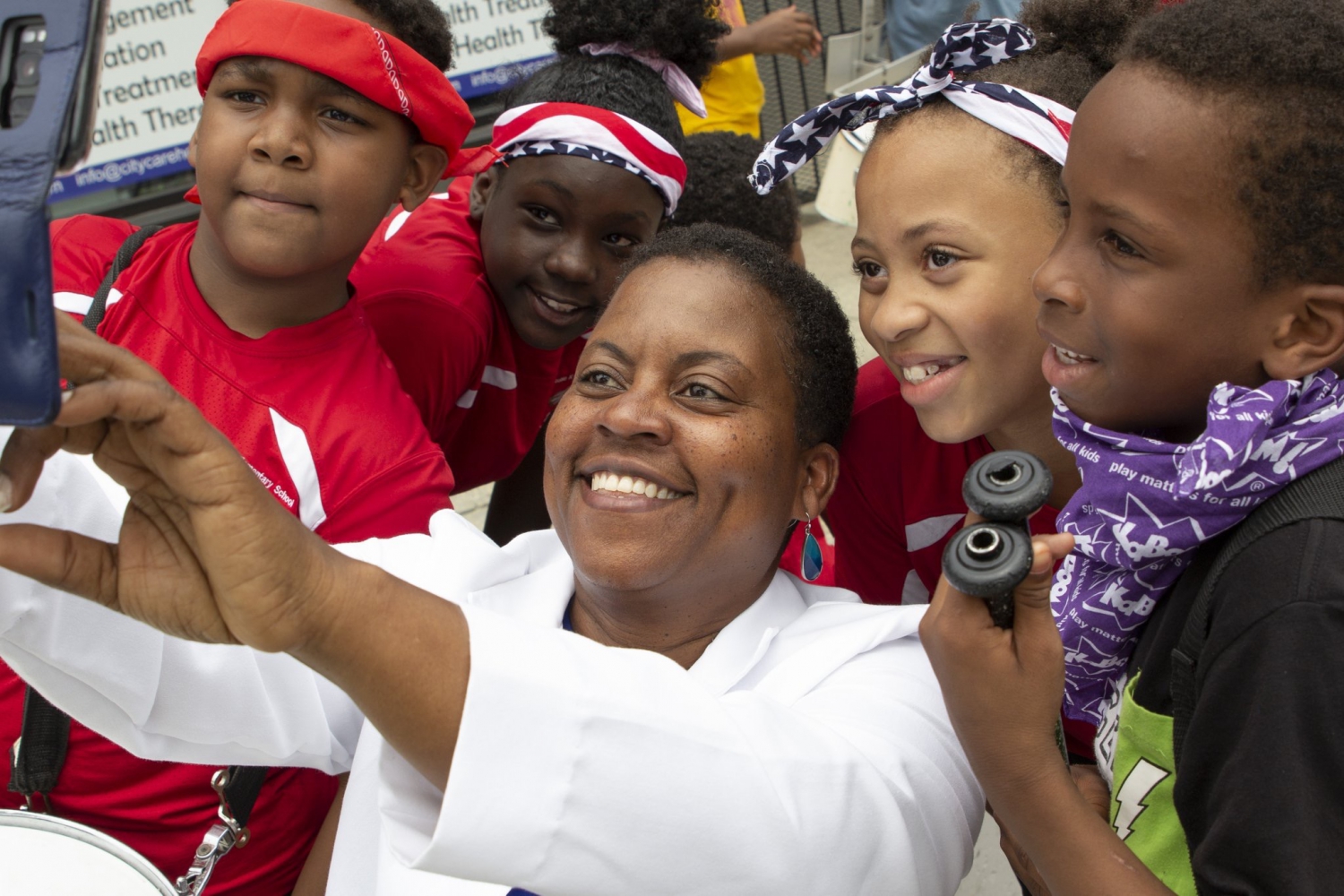 Since 1971, nearly 4,000 physicians and health care professionals across the United States have received their degrees from the UMKC School of Medicine. As a lead up to our Gold Jubilee 50th anniversary event on June 4, we are spotlighting some of our alumni who embody the school’s spirit and excellence in medical education and patient care.

Today, we catch up with Lisa Fitzpatrick, M.D., ’92, an internal medicine physician specializing in public health and infectious disease. She began her service in public health as a member of the Epidemic Intelligence Service with the Centers For Disease Control and Prevention’s (CDC) and subsequently was a foreign diplomat in the Caribbean and former chief medical officer for the Washington, D.C. Medicaid program.

Where are you working today?

I live in Washington, D.C. I recently gave up my clinic practice for now and work for myself as founder and CEO of a digital health media company for underserved communities called Grapevine Health.

Would you share one of your most fond memories of the UMKC School of Medicine?

This has to be my first patient on DoRo. I still remember him and can picture him sitting in the corner in his room in his bathrobe. He had Wernicke’s aphasia and he tickled me so much as a new student. I had never experienced someone with this kind of speech disorder. I’d ask him a question and he would respond with random responses that meant nothing. He was a great first patient to have. Easily some of the relationships I formed during med school changed my life.

What do you think is the greatest lesson you learned at the UMKC School of Medicine?

Rely on your clinical intuition. In today’s environment there is low value placed on the physical exam and it makes me very sad. I even have community members asking me why doctors no longer do physical exams or touch them. This is even pre pandemic. I think the physical exam is a lost art, as is looking at your own chest X-rays and I appreciate these skills instilled in me at UMKC.

What is something about you that people may not know?

I have changed very little since medical school as a person but now consider myself a global citizen which has made me more compassionate, selfless and worldly.

“We want people to feel welcomed, we want them to feel like they’re in an environment that they know, they trust, they frequent often,” said Jannette Berkley-Patton, a professor at UMKC’s School of Medicine, and a team member. Read more….

COVID vaccination rates are tremendously low in communities of color in Kansas City. On average, only 43% of individuals get vaccinated, which is about 7% lower than the national average. Read more….

An expert in disaster management and science who responded to the Ebola outbreak in Liberia said the disease had essentially been eradicated there.

Thomas Kirsch, M.D., M.P.H., director of the Center for Refugee and Disaster Response and an associate professor of emergency medicine at Johns Hopkins University, traveled to Monrovia, the Liberian capital, to work in an emergency operations center during the crisis late last year. He presented the W. Kendall McNabney, M.D., Lecture at the School of Medicine on April 30.

The largest Ebola outbreak ever recorded primarily affected the West African countries of Liberia, Sierra Leone and Guinea. More than 10,000 people died, according to the World Health Organization. “We went from a small, isolated outbreak of a very scary disease, that is a horrible way to die, that has a mortality rate of up to 90 percent, to this massive outbreak, which clearly caught the attention of the world,” Kirsch explained.

When he arrived in Liberia, Kirsch said he expected to find himself in a “zombie apocalypse.” Instead, he found that life in Monrovia was relatively normal. Shops were open, and people were going about their daily lives.

But there were washing stations with bleach solution in front of every building. Also, hand shakes and other forms of touching were forbidden, which Kirsch found disorienting. “Try to go through life like that,” he said. “It’s very odd, it’s very disturbing. But that’s the way people lived there.”

Kirsch was modest and stressed that the focus of his efforts in Liberia was on public health and that he did not provide clinical care. “I was a bureaucrat,” he said.

The United States spent hundreds millions of dollars and deployed troops to Liberia, a historical ally, when estimates suggested failure to act would result in 1 million people in West Africa becoming infected. But the disease was on the wane before the military opened its first treatment center. “Clearly, it was not the Ebola treatment beds that turned this epidemic,” Kirsch said.

What had changed was people’s behavior, Kirsch said. In addition to hand washing stations, isolating the sick and safer burial practices helped to bring the disease under control. “When a first spike occurs in your community, and you watch your neighbors vomiting on the street and dying, you change your behavior,” Kirsch said.

Kirsch said the competence of the political leaders and public health officials in Liberia was key to the social mobilization and education efforts. While there have been no known community transmissions in 80 days, a Liberian woman’s infection was confirmed in March. It is believed she contracted Ebola from unprotected sex with a man who survived the virus. The virus has been found in the semen of some men who have recovered from the infection. “This disease is now endemic in West Africa,” Kirsch said.

Kirsch, however, sounded optimistic that an Ebola vaccine would be developed eventually. “Ebola is a stupid little virus,” he said. “It’s not HIV.”